The following information aims to clear up any misconceptions about restriction policies.

The following information does not apply to non-EU applicants nor to applicants to medicine, dentistry or pharmacy programs.

The following is an example of how admission restrictions (i.e. a threshold grade and a threshold waiting period) are established: a degree program at Universität Hamburg may be able to admit 20 applicants in a given semester in accordance with a specific grade and in accordance with a specific waiting period (this means that prior quotas have already been taken into account); 90 % (= 18) of these places are offered based on your Abiturnote (overall secondary school leaving grade or grade-point average) and 10% (= 2) the time which has passed since you obtained your Abitur (secondary school leaving certificate). Let's assume that 40 people have applied. These are listed as follows, along with the information relevant to admission procedures (HJ = waiting period in terms of semesters):

What are admission restrictions (NC programs)?

The term NC denotes, first and foremost, an admission restriction. A degree program is restricted if a university decides before the start of a semester that only a limited number of applicants may be admitted. If there are more applications than the limitation allows for, there is a selection procedure in accordance with the above-mentioned criteria (see "quotas"). Currently, all degree programs (when applied to as a major) are restricted.

The first step consists in ranking applicants - both by grade (achievement ranking) and by the amount of time, counted as a half-year or semester, since the applicant has received his Abitur or secondary-school leaving degree (waiting period ranking). The outcome of such a ranking might appear as follows: 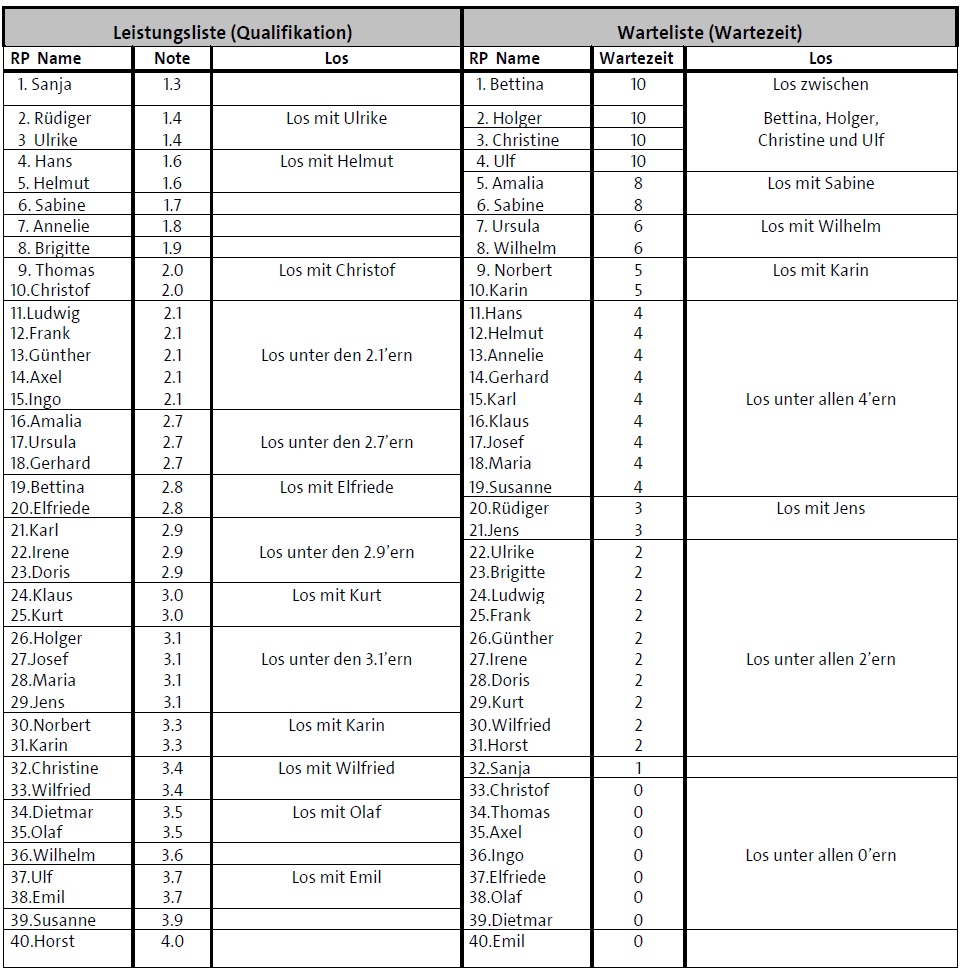 In the grade rankings, an applicant's Abiturnote (final or overall grade for secondary-school leaving degree) determines his or her ranking (RP) in relation to other applicants (see Sabine - RP 6 - and Anneliese - RP 7 -  in the section "Creating ranking lists"). If two applicants have the same grade, a lottery procedure is used (each applicant is randomly assigned a number at the start of application procedures).

Applicants on the waiting list are ranked according to the number of half-years since they have received their Abitur (secondary school leaving certificate - see Ulf, RP 6, and Ursula, RP 7, in the section "Creating ranking lists"). The waiting period accrues from the date on which the secondary school leaving certificate (Abitur) was obtained. Please note, however, that during this time, applicants may not be enrolled at another university in Germany. Periods of study at a private German university, however, are not deemed as periods of study. If the waiting period is the same for several applicants, a lottery procedure is used. Applicants may not wait more than 10 semesters.

So who ends up getting accepted?

We now send out acceptance letters to the 20 applicants who have been admitted. The University expects these applicants to confirm or reject admission within a fixed time period. In many cases, applicants turn down an offer of admission (perhaps they have applied to another university or would like to travel before they begin studying). Let's say, for example, that Hans, Brigitte and Holger (see "Creating ranking lists") have turned down their offers of admission. These three places are now offered in a succession procedure to applicants ranked next in the list, i.e. Elfriede and Karl from the achievement list would now be offered admission; Bettina has been offered admission based on her waiting time).

For the programs for which the places are allocated in the dialog-oriented service procedure, this step works differently. Please turn to the DOSV website for more information.

So how is the admission restriction value (NC Wert) now determined?

The waiting period threshold value corresponds to the waiting time accrued by the last applicant admitted from the waiting list, meaning Christine's waiting period of 10 half-years or semesters. Other applicants who have waited 10 semesters are subject to lottery procedures - like Ulf, who still did not receive an offer of admission after 10 years.

What conclusions can I draw from all of this? A grade point average does not improve according to the amount of time an applicant waits. Threshold values always reflect the relationship between supply (number of places) and demand (number of applicants). Threshold values can only provide information about past, not future, selection procedures. No one establishes a threshold value for a future selection procedure; threshold values are based solely on the grades and waiting times of the last applicants on the admission lists. You can find past restriction values here under "NC Werte und Bewerberzahlen" (NC values and applicant figures). There you can also find out about the ratios of places and applicants.