This page:UHH > About the University > Organization > Executive University Board > President 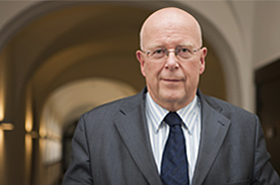 He completed his doctorate in 1973 and worked in the area of educational research for the State Ministry of Culture in North-Rhine Westphalia from 1973 to 1975. Between 1975 and 1977, Lenzen taught at the Westphalian Wilhelms University as Professor of Education.

He has led numerous projects in educational research and authored over 900 publications in his own areas of research.

Lenzen has headed up the education think-tank Aktionsrat Bildung since 2005. From 1999 to February 2010 he was a member of University Management at the Free University in Berlin, initially as executive vice president and, from 2003, as president. In November 2009, Lenzen was elected President of Universität Hamburg and took up office in March 2010.

Lenzen has also been council member in the European Universities Association since 2007 and was vice president of the German Rectors' Conference (Hochschulrektorenkonferenz) from 2007 to 2016. From 2017 to 2019 Lenzen was chair of Hamburg's State Higher Education Conference, as he was from 2013 to 2015.