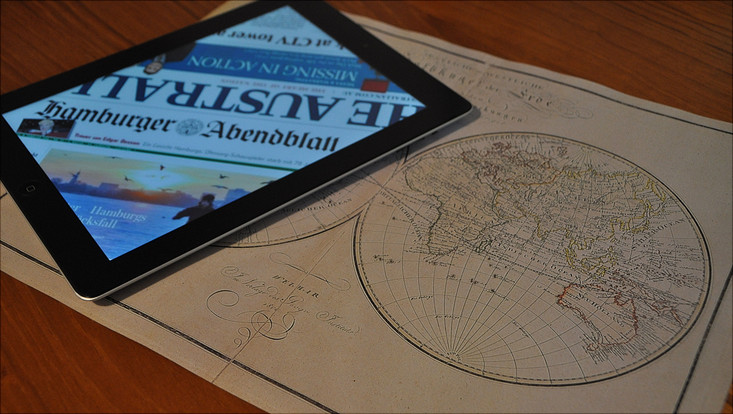 This cooperative project involves the Research Centre Media History at Universität Hamburg, the Centre for Media History at Macquarie University and the Center of Information and Communication Studies at Fudan University. It aims to establish close collaboration between Hamburg, Sydney and Shanghai in research and teaching in media history. It will facilitate frequent exchanges of senior and junior researchers, including postgraduates, to discuss and explore “transnational media histories”.

Thus, this project is linked to work on "entangled media histories”, drawing upon and contributing to histoire croisée, connected history, and Verflechtungsgeschichte in the field of media and communication studies.

By doing so, the new trilateral network will extend the research on media history beyond national boundaries and enable transnational research from a globally “entangled” perspective.

Histories, archives, and soundings. How to explore 'communicating port cities' in three continents - these were the topics of the 'Transnational Media Histories'-workshop 2018. The event took place from 12 to 13 September

2018 at Universität Hamburg, a workshop within the 'MQ-FU-HAM Trilateral Strategic Partnership' between Universität Hamburg, Macquarie University in Sydney and Fudan University in Shanghai. It was not the first meeting of the cooperative project 'Transnational Media History', but it was the kickoff-workshop for future plans in 2019 and 2020. Colleagues from the Centre for Media History in Sydney, from the School of Journalism in Shanghai, and from the Research Centre Media History at Universität Hamburg and the Hans Bredow Institute successfully started this joint work. Enjoy our short workshop video and watch how PhD candidates, professors, researchers, museum and PR managers discussed achievements in the field of transnational media and history and how they made new proposals for research on port cities.

Media worldwide face tremendous changes. Newspapers as well as TV and radio have to compete with the Internet. Taking global upheavals like these as a starting point.

Does Germany need a broadcaster such as SBS, not the least to deal with the current influx of 1.1 million migrants and refugees? A public, national television and radio station, funded by the Government and revenue from advertising? An institution, dedicated to the integration of migrants into one harmonious society, held together by common values and with a common purpose?

Wolfgang Mueller, producer at the German-language SBS Radio, invited Dr. Hans-Ulrich Wagner on 7 December 2015 to talk about current issues of political communication and about the new partnership between the Research Centre Media History in Hamburg and the Centre for Media History at Macquarie University in Sydney.