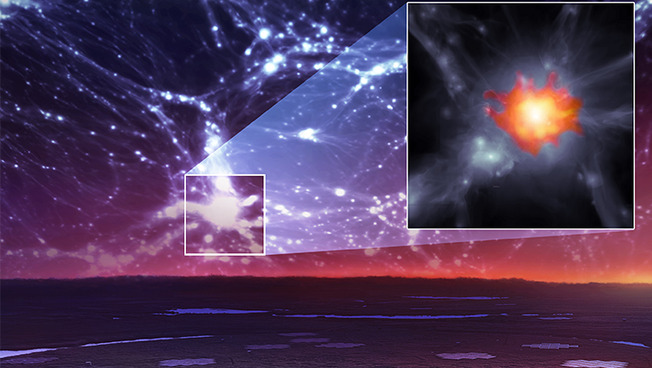 An artist’s impression of the vast space of the universe above the LOFAR telescope— the inset shows a magnified image of a galaxy cluster where a megahalo is being observed with LOFAR.
An international research team led by the Hamburg Observatory of Universität Hamburg has discovered 4 gigantic radio sources. These so-called megahalos are up to 10 million light years in size but have been detected for the first time with the help of the Low-Frequency Array (LOFAR) radio telescope. This was published in the journal Nature.

When viewed from a great distance, mass in the universe is not evenly distributed but resembles a net-like structure referred to as the cosmic web. There are often thousands of galaxies at the nodes of the cosmic web. After the big bang, the collision of such galaxy clusters is considered one of the most powerful astronomical events. During such collisions, tiny charged particles are accelerated almost to the speed of light. This produces radio radiation, which can be measured with special telescopes.

With the help of the world’s largest radio telescope, the Low Frequency Array (LOFAR), an international team led by Dr. Virginia Cuciti of the Hamburg Observatory has now detected 4 galaxy clusters that are surrounded by a shell of weak radio radiation. The research group calls this phenomenon megahalos. They are about 30 times larger than any previously known radio sources. “So we have discovered giant cosmic particle accelerators,” explains Dr. Cuciti, lead author of the study and an Alexander von Humboldt scholarship holder at Universität Hamburg.

“There is a high probability that the 4 megahalos discovered are just the tip of the iceberg of a widespread cosmological phenomenon and that future observations will unearth more megahalos,” Dr. Cuciti says. “This also means that further observations could reveal megahalos in many more galaxy clusters,” adds Prof. Dr. Marcus Brüggen, coauthor of the study. Megahalos suggest that most parts of the universe are filled with ultrafast electrons and magnetic fields and that there must be a mechanism to accelerate these electrons very efficiently.

LOFAR is a Europe-wide network of radio antennae, the core of which is located in the Netherlands. The telescope can detect low-frequency radio waves in the 10–240 MHz range. It is operated by the Netherlands Institute for Radio Astronomy (ASTRON). France, Germany, Ireland, Italy, Latvia, Poland, Sweden, Bulgaria, and the United Kingdom are partner countries.

LOFAR is currently undergoing a major upgrade to increase its sensitivity. This upgrade will enable researchers to explore the radio waves of the universe in unprecedented ways and to discover more megahalos. 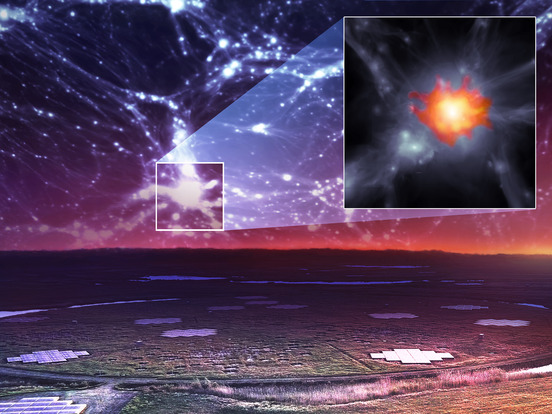 for screen display (JPG)for print purposes (JPG)
An artist’s impression of the vast space of the universe above the LOFAR telescope— the inset shows a magnified image of a galaxy cluster where a megahalo is being observed with LOFAR.
Picture: ASTRON/Cuciti/Vazza/Gheller 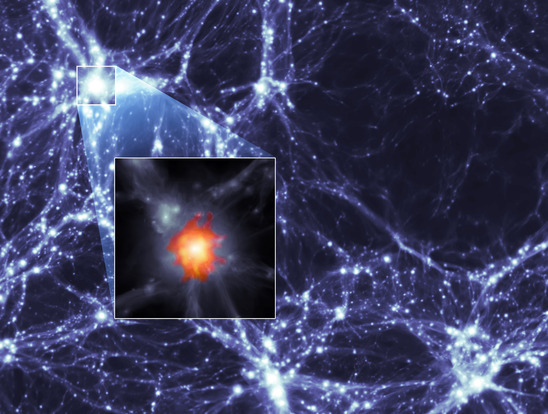 for screen display (JPG)for print purposes (JPG)
Computer simulation of the vast space of the universe— the inset shows a magnified image of a galaxy cluster where a megahalo is being observed with LOFAR.
Picture: ASTRON/Cuciti/Vazza/Gheller 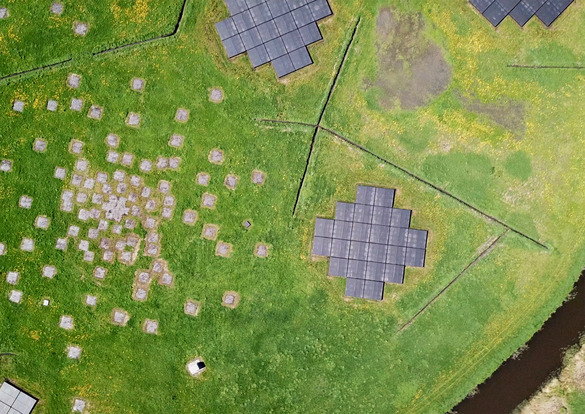 for screen display (JPG)for print purposes (JPG)
A region of the LOFAR core seen from above— both of LOFAR’s antenna types are visible.
Picture: ASTRON