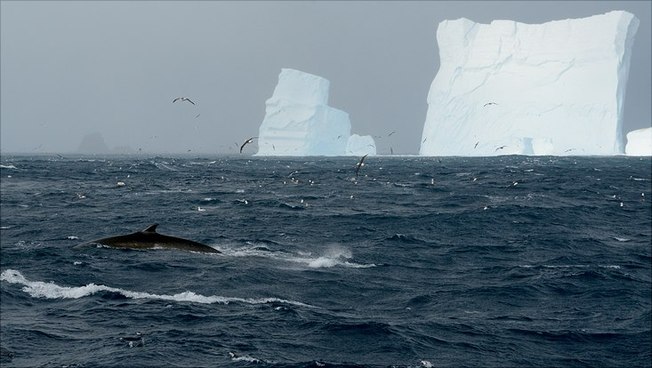 Fin whale in the Antarctic
Thanks to industrial whaling, the fin whale had become nearly extinct in the Antarctic. Now, for the first time, a research team headed by Dr. Helena Herr from Universität Hamburg has been able to show systematically that the fin whale population is recovering. The findings were published in the journal Scientific Reports.

The fin whale in the southern hemisphere belong to the subspecies Balaenoptera physalus. They grow to an average of 22 meters in length, weigh about 70 tons, and live primarily off krill and small shoal fish. In the Antarctic, whaling decimated the population in the twentieth century, reducing it to just 2 percent of its original size. In 1976, the catch quota for fin whales was set to zero, but only stray whales returned to their original feeding habitats.

After more animals were sighted on individual expeditions in the early years of 2000, the research team headed by Dr. Helena Herr, research associate in the Department of Biology at Universität Hamburg’s Center for Earth System Research and Sustainability, has now studied their presence systematically. On 2 expeditions to the Antarctic in 2018 and 2019, the researchers were able to prove that the fin whale can now be found in larger numbers at feeding grounds. With the aid of drones, observations made from the ship, and above all ship-based helicopter surveys, a group of feeding fin whales were documented for the first time—twice with up to 150 animals.

“This density and the recurrence of so-called feeding aggregations, which have not been observed since the beginning of whaling, suggest that the population is recovering,” explains Herr, who is also a visiting scientist at the Alfred Wegener Institute Helmholtz Centre for Polar and Marine Research (AWI). From her point of view, this attests to the success of the whaling prohibition. And the recovery of the whale population has also had a positive impact on the ecosystem: fin whale excretions create more nutrients in the top layers of the water, especially iron, which in turn benefits other organisms.

The effect, called the “whale pump,” could also be relevant in the fight against climate change. “The tiny organisms that profit from the richer store of nutrients bind a lot of CO2, thereby contributing significantly to the breakdown of carbon in the atmosphere,” says Herr. The larger whale population could thus also increase the binding of CO2 in one of the world’s most important ocean regions.

The study involves cooperation between Universität Hamburg and the AWI, the Carl von Ossietzky Universität Oldenburg, the Helmholtz Institute for Functional Marine Biodiversity at the University of Oldenburg, and the BBC. In 2018, research was conducted as part of an expedition by the Polarstern research vessel under the leadership of the AWI biologist Prof. Bettina Meyer. In 2019, the BBC undertook its first expedition on the Pelagic Australis. The BBC had already accompanied the first expedition and, using drones, had taken the first film recordings by helicopter. These are the first film recordings of fin whale aggregations in the world.