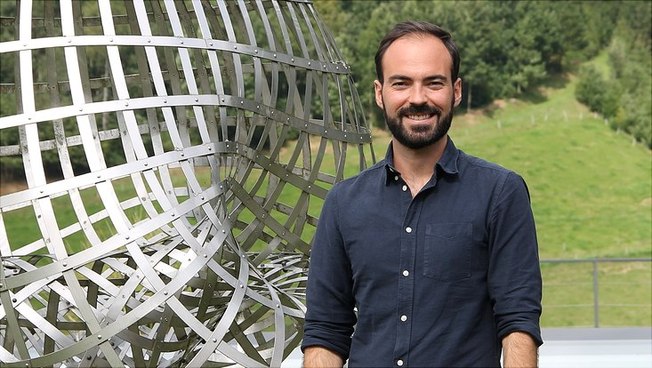 Photo: Archive of the Oberwolfach Research Institute for Mathematics

The Emmy Noether group headed by Dr. David Reutter started its work in April.
The German Research Foundation has awarded €1 million in funding to the early-career research group headed by Dr. David Reutter in the Department of Mathematics at Universität Hamburg. Reutter is researching mathematical theories that describe the behavior of fields in spaces with more than 3 dimensions.

“From a mathematical perspective, topological quantum field theories are easier to describe than complete quantum field theories,” according to Reutter. A topological quantum field theory, he explains, does not distinguish between a cup and a donut. This is because differences in the surface curvature of a cup and a donut are not visible in this theory. But in the case of holes, he continues, which can be recognized and described, it’s a different matter. Reutter clarifies using an example: “An ant can crawl across the surface into and out of a cup, regardless of the surface curvature. But it’s impossible to get directly from the body of the cup to the handle on the other side because there’s a hole in between. It’s the exact same thing with a donut. The ant has no direct path from one side of the donut’s hole to the other. It has to walk around the hole in the donut.”

In comparison to lower and higher dimensions, the description of 4-dimensional spaces, for example our spacetime, is above all astoundingly complicated and raises many questions. Mathematicians have by now conducted such thorough research on topological quantum field theories in 3 dimensions that concrete application is possible: “In the meantime, we can create our well-controlled conditions in the lab, which behave like topological quantum field theories in 3 dimensions, which is relevant to the possible architecture of quantum computers or highly compressed matter in physics,” explains Reutter.

David Reutter completed his bachelor’s and master’s in physics at ETZ Zurich before completing the Part III of the Mathematical Tripos master’s program at the University of Cambridge. He earned his doctorate in informatics from the University of Oxford in 2019. Subsequently, he worked as a post-doctoral researcher at the Max Planck Institute for Mathematics in Bonn and was the Strauch Postdoctoral Fellow at the Mathematical Sciences Research Institute in Berkeley, USA.