This page:UHH > Newsroom > In focus > 2019 > The 100th anniversary bash at Universität Hamburg

10 May 2019, by Hendrik Tieke, Jacinta Homans, and Felix Willeke

“Hamburg is its University:” Alumnus and Bundestag president Dr. Wolfgang Schäuble emphasized how important a university like Hamburg’s is for a democratic society.

In 197 days around the Earth: Alexander Gerst took this University banner to the ISS.

Visitors to the Campus party could try their hand at a game of a climate-themed Memory.

Universität Hamburg celebrates its 100th anniversary, exactly 100 years to the day after its official opening. Over 1,400 guests, including many honorary guests and prominent alumni, attended the ceremony while several thousand University members let their hair down at the Campus party.

It was a day to remember for everyone, from the Bundestag president to first-year students. The festivities began with an official ceremony and a campus party that went on into the evening hours. Dr. Wolfgang Schäuble joined the ceremony from Berlin, Dr. Alexander Gerst all the way from space, and comedian Otto Waalkes from his Blankenese residence. Waalkes even had one of his original artworks in tow as a gift to the University. Why the celebration? Exactly 100 years ago, on 10 May 1919, Universität Hamburg was officially founded; at the time, it had 1,700 students. Today, the University boasts over 43,000 students.

At 12 noon, anchorwoman and mistress of ceremonies Julia Sen greeted guests in the Audimax: “I am very excited about today because, like many guests here, I am also a proud alumna of this University!” Prof. Dr. Dr. h.c. Dieter Lenzen, president of the University, also greeted the roughly 1,400 guests, saying: “Look at this University and what its members have accomplished! Thanks to them, the University has evolved into an uncompromising institution of enlightenment.”

Then comedian Otto Waalkes took to the stage, which he remembers fondly: this is where, in 1972, Waalkes recorded the first album for the show that made his name. Waalkes presented his own artwork, which he dedicated to Universität Hamburg: an “Ottifant”—an elephant cartoon named after Otto and the majestic mammal—with a cap and scroll. “This is the first Ottifant with a university degree,” said Waalkes. He then congratulated the University and regaled the audience with his inimitable yodeling. The Unifant is also now available as a key chain, postcard, or magnet set from the Unikontor.

Peter Tschentscher, Hamburg’s mayor and formerly a medical student at the University, emphasized the University’s value for the city. “The entire city is proud and celebrates with you,” he told the gathered University members. He continued, “Science and scholarship are good for Hamburg because knowledge of the potential for technical and social progress is the decisive factor in our future development. Today, the great discoveries are not being made in the seas or on strange continents but in laboratories and research institutions. Science gives us the decisive edge.”

Schäuble: Hamburg is its university!

Dr. Wolfgang Schäuble is also a University alumnus. In the 1960s, he studied law here. The president of the German Bundestag spoke with urgency about why independent science and scholarship constitutes a pillar of democratic societies; in an increasingly complex world with vanishing certainties, science and scholarship can provide orientation. He addressed the members of the University with these words: “I wish for Universität Hamburg that the researchers, teachers, and students gathered here today continue with all of their powers to shape freedom as guaranteed in our Basic Law and to defend intellectual freedom—in the interests of a city which ensures this freedom in research, teaching, and education. And which, after its first 100 years, can say with confidence and pride: Hamburg is its university!”

As commandeer of the ISS, Alexander Gerst had already sent greetings to the University, above all to its students, from space. Now he appeared in person to congratulate the University on its 100th anniversary and to accept a special honor: President Lenzen formerly presented the former doctoral student with an honorary senator certificate.

“In academia, as in space travel, we often face difficult professional challenges,” Gerst said. “When a university makes it easy to do research, then it is a good university. In this respect, Universität Hamburg is a good university. It provided me, when I was a doctoral student, with outstanding research conditions.” As a gift, the astronaut brought a University banner that he had taken with him for his 197 days on the ISS. “It has traveled with me 3,061 times around Earth and covered more the 130 million kilometers—that is just about the distance between Hamburg and the sun,” said Gerst.

Honorary senator and patron of the University, Prof. Dr. Michael Otto, was on stage to witness the awarding of the certificate. In the 1960s, the chair of the board for the Otto Group studied economics at Universität Hamburg. He praised the University for its research on sustainability: “When I was studying, the preservation of nature and climate protection were not major topics. Since then, however, a lot has happened: Today, several research areas, including an entire cluster of excellence, focus on these issues.”

Among the guests in the Audimax were students, staff, teachers, alumni, members of partner schools, and friends and patrons of the University from the business, cultural, and societal sectors. At the end of the ceremony, some raised a glass of sparkling wine to toast the University while others headed over to the festivities on the Main Campus at Von-Melle-Park.

The Main Campus was the site of the University’s largest party in its history. It attracted over 1,000 visitors. Among the program highlights were a poetry slam, a performance by the theater group Kalliope, soccer-playing robots, street-art workshops, and a photo bus offering snap shots. Staff members’ and students’ children could jump around in a bouncy castle, have their faces painted, or get a balloon animal.

The student council, AStA, organized live music: The Norwegian punk-pop band Sløtface was the main-stage attraction; Blowm & Maddin un de Maudefaades performed their “Plattdütsch” or Low German rap, and the Hamburg pop band Dein Fadinzt celebrated the absurdities of life. The AStA chari Karim Kuropka said, “In the last 100 years, the University has progressively fought for sound education and we hope it will continue to do so in the future.” And it was to the future that everyone on the Campus raised a glass—a fantastic fest for an historical day! 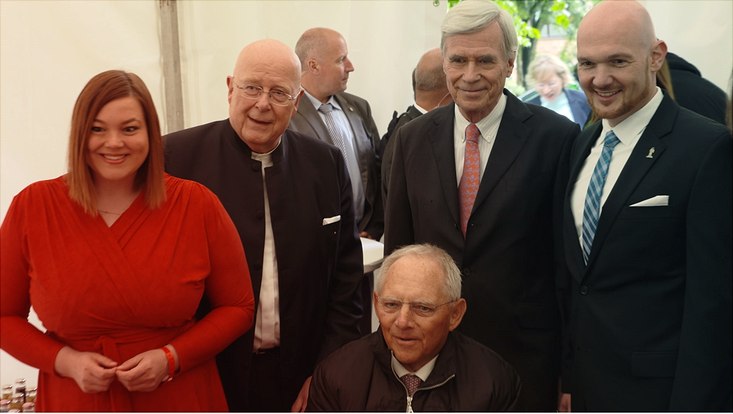 Impressions from the big bash

Photos of the festivities

Follow us on social media (#unihh100, #campusfest) to see impressions from the ceremony and Campus festivities:

24.09.2019|Anniversary
Exhibition on the history of the University opens
The new exhibition on Universität Hamburg’s past and present gives an exciting glimpse into 100 years of teaching, research, campus life, and university culture. It also reveals a University that reflects Germany’s own eventful history.