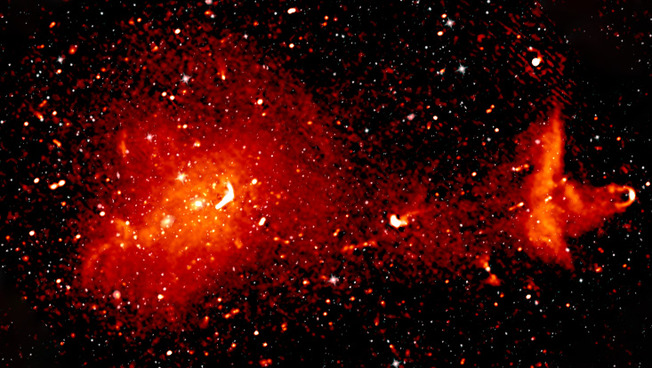 The coma cluster is 300 million light-years from Earth and consists of over 1,000 galaxies, shown here in radio and infrared fields. The radio data make the radiation from the high-energy particles that penetrate the magnetized space between galaxies visible.
For 7 years, an international research team that included the Hamburg Observatory of Universität Hamburg gathered data for a new sky map depicting 4.4 million galaxies. Previously, these galaxies were unknown. The map has now been published in the journal "Astronomy & Astrophysics".

This discovery was possible by the largest-ever radio telescope LOFAR (Low Frequency Array), which has receiving stations in 7 European countries. Researchers mapped a fourth of the northern sky within the radio wave area and are now publishing the data. Most of the objects on the new map are billions of light-years away. Generally, the map shows galaxies that contain massive black holes or areas with very dense constellations at their center.

The enormous amount of data covers recordings from 3,500 hours of observation and has a volume of 8 petabytes, which is roughly the storage capacity of 20,000 laptops. And yet the data covers only 27 percent of northern space, which LOFAR will ultimately document completely. The measurements already provide new opportunities for researching the emergence of black holes and stars. The LOFAR data also yield new knowledge about colliding galaxy clusters containing hundreds to thousands of galaxies and new insights into magnetic fields and high-energy particles in the Universe.

The data generated by LOFAR are available for further evaluation to researchers the world over and have also been used by several scientific groups in the past years. In Hamburg, the team headed by Prof. Dr. Marcus Brüggen is working with these data sets. Marcus Brüggen ist an astrophysicist at the Hamburg Observatory and, jointly with Bielefeld University, responsible for the LOFAR station in Norderstedt. The researchers in Hamburg are taking an especial look at gigantic radio sources that are a million light-years in length. In this way, they want to research the origins of magnetic fields.

“The completely innovative technology of the LOFAR radio telescope and the participation in this international project make it possible for us to make important contributions to the research on cosmic magnetic fields. This is also an important research project in the Cluster of Excellence Quantum Universe,” says Marcus Brüggen. It is already clear from the data that the magnetic fields in the Universe must have developed their current strength quite early, for chaotic gaseous movements strengthen magnetic fields very quickly. This process has been dubbed “dynamo.”