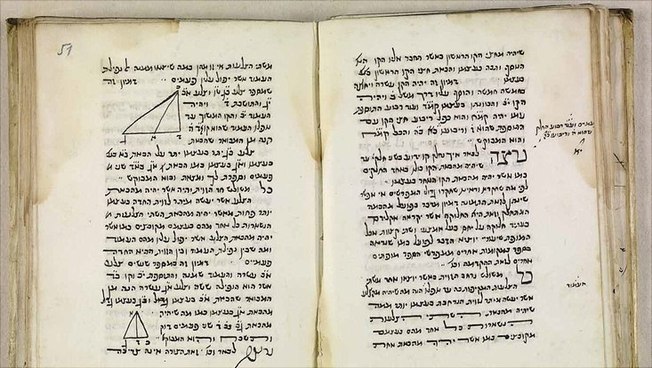 The project database contains works such as a Hebrew commentary on Euclid’s Elements. The Codex Levy 113 manuscript from the State and University Library Carl von Ossietzky hails from the fifteenth century.
As part of the long-term project PESHAT in Context, researchers have been studying the philosophical and scientific terminology of pre-modern Hebrew. In a fourth funding phase, they have now received another €960,000 from the German Research Foundation, to be used from 2023 to 2025. In total, the project will have received funding in the amount of €3.3 million for 12 years.

Thanks to research in the project PESHAT in Context, a new database that is both a dictionary and a collection will be published. The focus is on the central works of Medieval Jewish philosophy from the ninth to sixteenth centuries. These will be systematically organized in the database. The database will include not only Hebrew texts but also the original versions of many writings originally written in (Judeo)-Arabic and translated into Hebrew in the twelfth and thirteenth centuries.

This extensive collection of Hebrew terminology, the Judeo-Arabic source texts, and other parallel translations into Latin makes the database a significant research tool in Hebrew linguistics. It will enable users to, among other things, gain comprehensive understanding of the dynamics of cultural exchange and the historical development of Hebrew scientific language.

The project participants are also cooperating with numerous researchers and including citations to databases in other international digital humanities projects. “With our work, we would like to strengthen the worldwide academic discourse with various approaches and to provide all interested researchers a platform for research material and exchange,” explains project head Prof. Dr. Guiseppe Veltri, professor of Jewish religion and philosophy at Universität Hamburg.

The €946,000 in funding will be used for another international conference in Hamburg and several publications in the Officina Philosophica Hebraica series. PESHAT in Context, which will run to 2025, will have been funded for 12 years in total. The project’s Hamburg team includes Dr. Michael Engel (coordinator), Dr. Margherita Mantovani, and Florian Dunklau (MA); researchers are cooperating with Hebrew University of Jerusalem (Dr. Reimund Leicht is the academic co-director) and the University of Amsterdam (Dr. Resianne Fontaine).