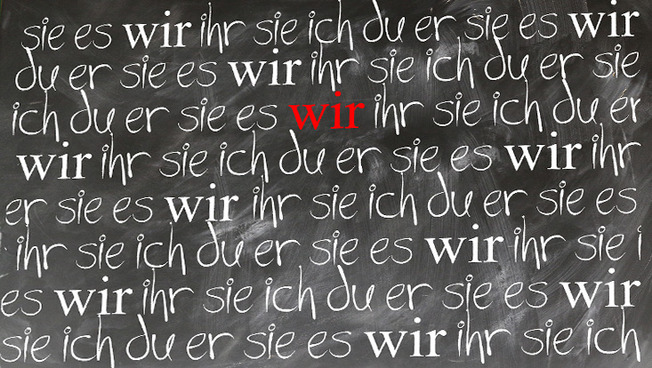 In the new German Research Foundation research group on pronouns, early career researchers are playing an especially important role.
We, you, it: everyday, each one of us uses pronouns, but how do we use them when? Now a team of researchers wants to find out and is receiving funding from the German Research Foundation to do so. The group Praktiken der Personenreferenz: Personal-, Indefinit- und Demonstrativpronomen im Gebrauch will receive roughly €2 million over a period of 4 years.

Pronouns stand for people, things, situations, or facts. But pronouns do not only refer to something; they also say something about relationships, for example, to an individual. For example, the distinction in German between the formal and informal “you” (Sie and Du), including now archaic forms, say a lot about social relationships. And the personal pronoun “we” can, depending on context, be inclusive OR condescending and exclusionary. Consider, for example, the question: “Have we already taken our medicine, then?”

The new research group Praktiken der Personenreferenz: Personal-, Indefinit- und Demonstrativpronomen im Gebrauchconcrete is looking at the use of pronouns, now and in the past, and their impact. The group is headed by Prof. Dr. Wolfgang Imo from the Institute for German Language and Literature at Universität Hamburg. It will be looking at pronouns from Old High German to today and include research on the different types of media. The German Research Foundation is funding the research group, which is set to begin work at the end of 2022, to the tune of roughly €2 million over the next 4 years.

In 7 sub-projects, researchers will do empirical studies of pronoun usage on the basis of various data sets: interactions between doctors and patients; private table conversations; WhatsApp chats; video recordings of emergency exercises; and letters to the editor. They will look at both today’s spoken and written German. Furthermore, researchers will look at texts from all epochs spanning Old High German, Middle High German, and Early Modern German, as well as dramatic texts from the Baroque, the Enlightenment, Sturm und Drang, and the Classic Period. Research group members will also discuss best practices for identifying key words and handling the automatic evaluation of data sets.

“The data should provide information about communication practices using pronouns and to what extent these become established, change, or disappear across the epochs,” explains Prof. Dr. Wolfgang Imo. Another goal is to determine the role of text types and communicative genres in the frequency of certain pronouns, how pronouns lead to social positions, and how situations can be construed differently and from different perspectives.

DFG research groups are intended to allow researchers to address current issues in their field, and to establish innovative new directions in research. The funds provided by the DFG are largely intended for new projects for early career researchers.