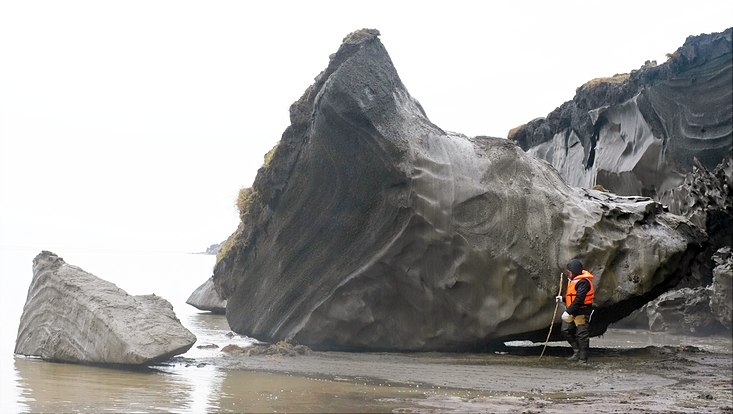 If global greenhouse gas emissions continue unabated, the erosion rate on Arctic coasts could more than double by the year 2100. On average, it would then amount to up to three meters per year - in the entire Arctic.
Global warming is causing permafrost in the Arctic to thaw and sea ice to melt. As a result, coasts are less protected and are being eroded, while carbon stored in the soil and carbon dioxide are being released into the ocean and atmosphere. In a first, researchers at Universität Hamburg have now calculated the future scale of these processes for the entire Arctic. Their conclusion: each degree of warming accelerates them considerably. Their findings have now been published in the journal Nature Climate Change.

Erosion is destroying the coasts of the Arctic. The warming of the soil, leading to ruptures and slumping, can endanger important infrastructures and threaten the safety of local populations. In addition, these processes release carbon stored in soils into the ocean, which could alter the role of the Arctic Ocean as an important storehouse of carbon and greenhouse gases. They could also contribute to increase climate change.

Until now, insights into the magnitude and speed of these changes have been lacking for the future. Using a new combination of computational models, scientists at Universität Hamburg have for the first time determined them for the entire Arctic.

“We have run through a range of scenarios, depending on how much greenhouse gases humanity will emit in the coming years,” reports the study’s lead author, Dr. David Nielsen from Universität Hamburg’s Cluster of Excellence for Climate Research CLICCS. “According to the study, not only is more and more land mass being lost in absolute terms; with each degree of temperature increase, the annual rate of erosion increases – in meters, but also in millions of tons of carbon released.” If greenhouse gas emissions remain unchecked or continue to rise, the rate could more than double by 2100, which would mean erosion losses of up to three meters per year.

The new study provides important information for coastal protection, and for political and social planning in the affected regions. At the same time, estimates of future erosion rates offer an indispensable basis for research on interactions between thawing permafrost and the release of carbon in the Arctic, aspects that may be mutually reinforcing. According to Nielsen: “Our findings also show that a shift toward greater sustainability and significantly lower greenhouse gas emissions could slow the acceleration in the second half of the century. However, it won’t be possible to stop the loss of land mass entirely.”

Together with other researchers from Universität Hamburg, the Max Planck Institute for Meteorology, the Alfred Wegener Institute, Helmholtz Centre for Polar and Marine Research, and the German Meteorological Service, Nielsen has for the first time calculated the future balance for the Arctic as a whole – an important achievement, since coastal erosion varies greatly from region to region. “In the Arctic, erosion is always a combination of thermal and mechanical factors,” the climate researcher explains. His calculations therefore link existing Earth system models with observational data, wave simulations and climate reanalyses: “Depending on the location and shape of the respective coast, we expect to see varying wave heights. With increasing temperature, the range of the waves also increases, because the sea ice disappears. In addition, the ice-free period in the summer is lengthened, making coasts even more vulnerable.”

Dr. David Nielsen conducts research on possible and plausible climate futures at Universität Hamburg’s Cluster of Excellence CLICCS (Climate, Climatic Change, and Society). He is also a member of Universität Hamburg’s Center for Earth System Research and Sustainability (CEN). This study was conducted in close collaboration with the project “Nunataryuk” and was supported by the European Research Program Horizon 2020.

for screen display (JPG)for print purposes (JPG)
If global greenhouse gas emissions continue unabated, the erosion rate on Arctic coasts could more than double by the year 2100. On average, it would then amount to up to three meters per year - in the entire Arctic.
Picture: AWI/P.Overduin