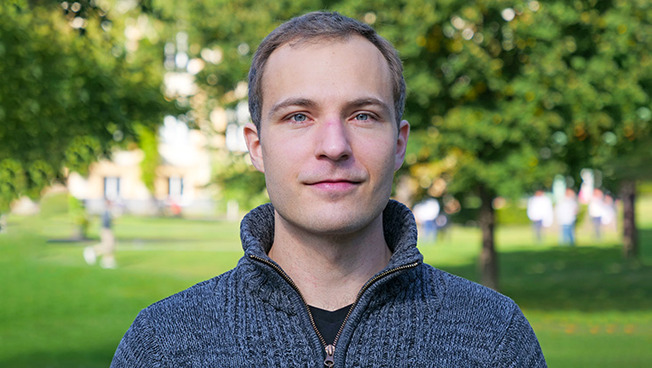 Dr. Thore Posske
Twisting quantum systems so much that they are generally more stable in the face of external disturbances and can be built into quantum computers— this is the goal of Dr. Thore Posske from the Department of Physics at Universität Hamburg. Posske, who is also a Young Investigator Group Leader at The Hamburg Centre for Ultrafast Imaging: Cluster of Excellence: Advanced Imaging of Matter, will receive a roughly €1.5 million Starting Grant from the European Research Council for his QUANTWIST project.

Quantum technology will revolutionize the recording, processing, and transmission of information and create never-before potential for science, business, and society. Integrated into quantum computers, it could solve many problems more efficiently than standard computers can. However, the development of quantum systems is complex because their building blocks, consisting of only a few atoms, are so small that environmental stimuli render them instable and thus often unusable. In the last several decades, researchers have therefore tried to protect quantum systems from their environment. This, however, is also complex and currently, works in practice only in a very limited way.

Researchers are thus now looking for effects at quantum level that are more stable when faced with environmental stimuli and can, as a result, protect stored information. This is exactly where Posske wants to start his research using the ERC Starting Grant. He will study innovative data storage for quantum computers that, for example, consist of tiny chains of only a few magnetic atoms.

The smallest unit of the standard computer is the bit, which can use 2 states: “0” and “1”. This works similarly to a light switch: electricity flows and the lamp lights up (1) or no electricity flows and the lamp stays off (0). In the tiny data storage units of magnetic chains, we can picture the magnetic directions of the individual atoms as small arrows. If the arrows point in the same directions, then that corresponds to “0”; if the arrow points are arranged in a spiral, then that means “1.” Put another way, the information is stored in quantum states “spiral available” (1) or “spiral not available” (0). The magnetic spirals cannot just be unwound, and they are therefore much more stable than normal quantum states, through which the chains can be reduced to a few atoms.

“I explain why this state is more stable to my family like this: I put down a shoelace and then I make a bow. That is the digital state ‘1.’ The state ‘0’ is the point at which I put the shoelace down. If I now rigorously shake the shoelace, I can no longer distinguish between the two states. But if instead of a bow I make a knot and then shake it, I can’t loosen the knot; the information is protected against external stimuli,” explains Dr. Thore Posske. Together with his team, Posske wants to study the full potential of this storage concept and expand his investigation from 2- to 3-dimensional systems, for example, magnetic vortices in solid sates.

The QUANTWIST project will start at the beginning of 2023; Posske is still looking for support for his team. “Solid-state physics is the melting pot of all physics. We study quasi-particles that also appear in quantum field theory and in particle physics,” says Posske. “The topological systems we use also play an important role in the General Theory of Relativity and we are now even studying quantum geometries. All of that makes solid-state physics, especially for students, both in mathematics and physics, a highly varied and exciting topic. And it may be that ultimately, someone has an inspiring idea and founds a start-up company and builds something that revolutionizes the world. Universität Hamburg—University of Excellence and The Hamburg Centre for Ultrafast Imaging: Cluster of Excellence Advanced Imaging of Matter and the outstanding scientific projects in Hamburg, such as the start-up incubator and Science City Bahrenfeld, create a unique research climate in northern Germany.”