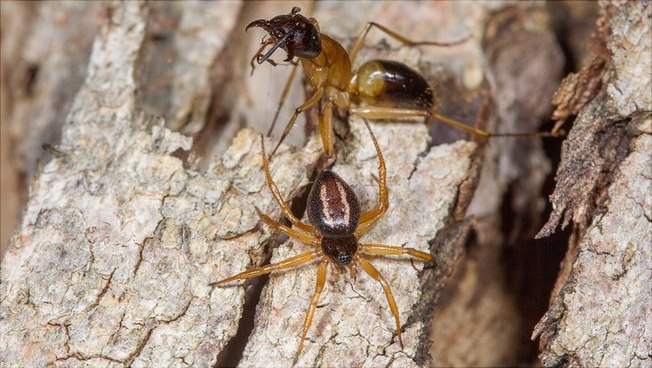 The spiders are only half the size of their ant prey
For the first time, a research team involving the Department of Biology at Universität Hamburg assisted by detailed behavior analyses have shown how the Australian ant-spider, Euryopis umbilicata, can catch prey that is significantly larger than itself. This hunting technique includes an acrobatic attack sequence, with the actual moment of capture happening in a fraction of a second. The results have been published in the journal Proceedings of the National Academy of Science (PNAS).

The Australian ant-slayer Euryopis umbilicata lives on the trunks of eucalyptus trees and hides under the bark during the day. At dusk, it emerges to hunt along the trunk. Behavioral analyses conducted by German and Australian researchers now show in detail, how this type of spider uses its hunting technique to capture even the ferocious camponotus ants without becoming prey itself.

The team watched spiders on many trees for many nights, and discovered that up to 9 individuals were hunting on the same tree. “Astonishingly, almost all of their prey was exclusively made up of ants from the Camponuts consobrinus species. This kind of extreme prey specialization is unusual, as predators like these spiders normally feed on a range of prey,” explains Alfonso Aceves-Aparicio, who is the lead author of the study as part of his doctoral research for the Behavioral Biology working group under Prof. Dr. Jutta Schneider of the Faculty of Biology at Universität Hamburg and the Macquarie University in Sydney (Australia). “Additionally, most predators hunt prey that is smaller than they are. That is not the case here, as the ants are approximately double the size of the spiders.” Only approximately 0.3 percent of the known species of spider feed on ants, presumably because their powerful mandibles, formic acid, and their sheer number often make them dangerous and well able to defend themselves.

To find out how these tiny tree spiders manage to hunt such large prey, the researchers collected C. consobrinus ants and let them loose on the tree a few centimeters away from the spiders. They then filmed the spiders with a high-speed camera, taking 25 or 250 images per second, and examined these individual images. A total of 60 hunting sequences were recorded in this way.

The analyses showed that the hunt occurs in two phases. The first phase is a kind of acrobatic attack, in which the spider attaches a strand of silk to the tree, then launches itself over the ant’s body, landing on the other side. They pull the silk strand from their spinnerets with their hind legs while jumping, attaching it to the ant in the process. In the second phase, the spider circles the ant, further entangling it in sticky silk, before then delivering a toxic bite. Finally, the ant is hauled away for consumption, often dangling by a silk thread.

While the acrobatic attack takes less than a second, the spiders need a lot of time to immobilize and kill their prey. “We assume that this acrobatic, super fast immobilization and the subsequent wrapping of the prey in spider silk allow the spiders to use this plentiful, but dangerous, prey as a food source.” explains Aceves-Aparicio.

Every time the spider successfully managed to attach the silk to an ant during the initial attach resulted in the ant being caught. There were only 5 cases where the hunt failed. These typically occurred when the ant fell off the tree before the viscous spider silk touched their body. That gives the spider an astonishingly high success rate when hunting, surpassing peak predators like cheetahs and pack-hunters like lions and wolves, which generally have a kill rate of less than 50 percent.

“Now we need further research to explain in detail what mechanisms allow these spiders to catch such dangerous prey. How can they make such precise movements at such high speed, and how do they achieve a quick and efficient adhesion of their viscous silk to the ant’s body?” asks Prof. Schneider. “The interesting thing is that two similar species on other continents use very similar strategies to hunt really big ants. Detailed comparative studies would be incredibly interesting, and may reveal whether evolution has found different ways of getting to the same goal, or whether it’s the same methods that have allowed these spiders to find a new dietary niche by specializing in big ants that are well able to defend themselves.”

Watch a recording of the spiders in action https://lecture2go.uni-hamburg.de/iframe/?obj=48957 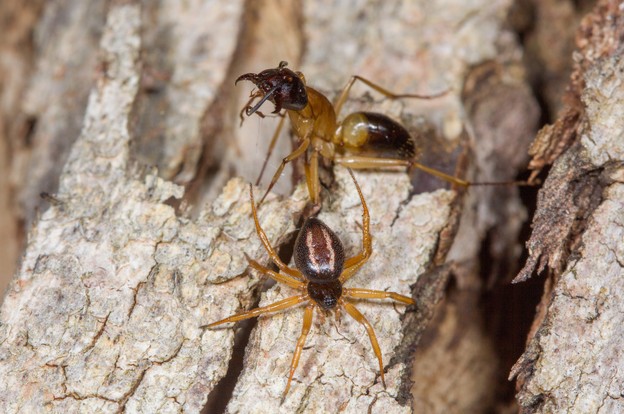 for screen display (JPG)for print purposes (JPG)
The spiders are only half the size of their ant prey
Picture: Alfonso Aceves-Aparicio