Start of a public series on Hamburg’s musical historyOtto Waalkes, Udo Lindenberg and Friends on the Universität Hamburg Stage 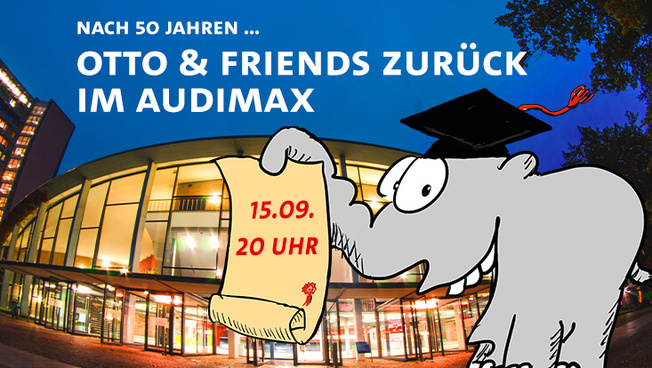 The concert is bringing the biggest lecture hall at our University is back into the spotlight as a (historic) venue in the city.
At 8 pm on 15 September 2022, exactly 50 years after Otto’s legendary concert in the Audimax at Universität Hamburg, Hamburg’s music greats are heading back to the University’s stage with their show “Get Back To Audimax!”. In collaboration with the University, the largest lecture hall on campus will rock again, with a Beatles Show, and songs by the artists. It is the start of a series that deals with Hamburg’s music history.

Together with Hamburg’s Beatles expert, Stefanie Hempel and her band, Otto Waalkes, Udo Lindenberg, Jan Delay, Inga Rumpf, Annett Louisan, Abi Wallenstein and newcomers like Michèl von Wussow, Phil Siemers and a surprise guest will present rock‘n'roll, classic hits, and popular favorites by the “Fab Four” to the stage. For many of the musicians involved, it is a return to the stage on which their career’s began. Otto Waalkes, Udo Lindenberg, Abi Wallenstein, and Inga Rumpf all started on the stage of the largest lecture hall at Universität Hamburg in the 1970s, and Jan Delay is an alumus of the University.

The concert, on 15 September 1972, titled “Otto Live im Audimax” was recorded on vinyl and founded his breakthrough onto the national stage, remaining a classic in the history of German humor. “This is where it all started, exactly 50 years ago: ‘Otto Live im Audimax’. That is one reason to do it again...” concludes Otto.

The 1,400 tickets for the concert in the Audimax go on sale on Tuesday, 9 August 2022 (10 am). Relevant information is available on: https://www.ottifant.de/otto-live-termine/

University president Prof. Dr. Hauke Heekeren welcomes the event, “I am very happy that Universität Hamburg—University of Excellence can show how important information transfer to the Hamburg community with this wonderful collaboration project. With ‘Get Back To Audimax!’ the biggest lecture hall at our University is being brought back into the public spotlight as a (historic) venue in the city.”

The central building on the Von Melle Park campus was a frequent concert venue, particularly from the 1960s to 1980s. In addition to the participants in the anniversary concert, other international stars like Pink Floyd, Tom Waits, AC/DC, and Meat Loaf have all rocked the Audimax.

Series of events and chances to join in the research

The initial concert on 15 September is flanked by a series in the University Museum on the subject of Hamburg’s musical history and a temporary history lab with citizen-science components. Universität Hamburg writes and researches musical history.

The formats were initiated by Dr. Antje Nagel, Head of the University Museum, and Prof. Dr. Thorsten Logge from hte field of Public History. The historians work together with students as part of the first seminar on Hamburg music history in the 1970s and 1980s. particularly areas and networks within Hamburg music cultures.

The first research results will be presented in the University Museum from 16 September. The exhibitions are presented as workshops that will continue to develop with new material such as contemporary recordings. Hamburg resident are thus also asked to contribute to a collection of sources for Hamburg music history, by bringing entry tickets, posters, and memorabilia to the museum to be scanned and included into the exhibition. More details to come soon.