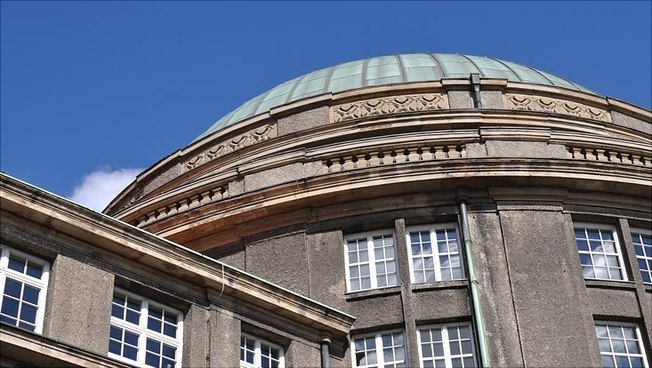 The Universität Hamburg Main Building
Be it the disruption of controversial lectures or seminars, the refusal to engage in academic debate for political or religious reasons, or the exertion of politically motivated pressure on academics, there has recently been an increasing number of cases in which attempts have been made to curtail or challenge science and scholarship’s constitutional right to academic freedom. For this reason, Universität Hamburg has formulated a code that defines a free space for academia and draws clear boundaries for restrictions of this free space. In doing this, the University joins the ranks of academic organizations that have addressed this issue and is one of the first higher education institutions to have incorporated a code of academic freedom in its mission statement.

A commission comprising 14 individuals from various university-status groups at Universität Hamburg has formulated 11 core theses on behalf of the Academic Senate and the Executive University Board. The theses are not intended to be instructions; rather, they represent the University’s self-affirmation of how it wants to and must shape the freedom guaranteed to it by the Basic Law for the Federal Republic of Germany (Grundgesetz für die Bundesrepublik Deutschland). At the same time, the code also signals to the outside world that the University considers this freedom essential and will continue to make use of it assertively.

The 11 core theses deal with, inter alia, academic freedom as an individual and institutional right, free space for academia, boundaries of freedom, and responsibility for one’s own actions. Among the reasons considered were the delegitimization of academic topics or subjects, the unwillingness to discuss ideas and content that are perceived as uncomfortable or threatening, the insistence on trigger warnings, and the structural, sometimes subtle and informal, influence. However, the authors also emphasize that not every conflict is a threat to academic freedom, as they are occasionally presented.

Univ.-Prof. Dr. Dr. h.c. Dieter Lenzen, President of Universität Hamburg explains: “Science and scholarship does not conform to political, religious, or other wishes but rather to its own guiding principles. In this respect, science and scholarship is inextricably linked to responsibility. Any incursion into academic freedom and any form of curtailment of this freedom must be viewed all the more critically, and real threats such as these must be stopped. Against this background, the Academic Senate and the Executive University Board of Universität Hamburg appointed a commission to formulate the Code of Academic Freedom, which is now available. The code serves to clarify the framework within which academic freedom is to be exercised and is incorporated in the University’s mission statement. I thank the commission for its valuable contribution to our institutional self-regulation.”

Prof. Dr. Hans-Heinrich Trute, Faculty of Law at Universität Hamburg and chair of the commission that drafted the Code of Academic Freedom, says, “Comparatively speaking, academic freedom is legally guaranteed to a high degree. However, in order to be real, this freedom must also be assertively claimed by academics and academic institutions, even in the face of interference and threats. The code will contribute to this.”