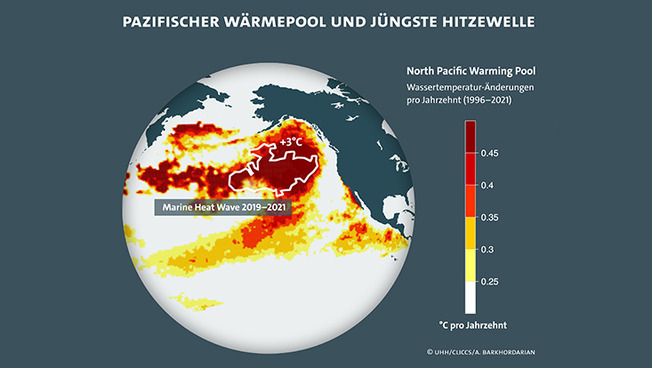 This image shows the rise in water temperatures in the northeast Pacific Ocean from 1996 to 2021 (Pacific warming pool). Measurements are provided in Celsius (rise per decade). The white outline stands for the marine heat wave 2019–2021 that lies in the warming pool region.
A team of researchers in the Cluster of Excellence Climate, Climatic Change, and Society (CLICCS) has just discovered a long-term, ever-warming pool of warm water. It measures 3 million square kilometers, can be traced back to human-induced rise in greenhouse gases, and provides favorable conditions for extreme heat waves in the northeast Pacific.

Dr. Armineh Barkhordarian now reveals in the journal Nature Communications Earth and Environment that this pool cannot be explained by naturally occurring climate fluctuations; it is caused by humans. “This warm pool will also lead in the future to a rise in water temperature and thus to more frequent and stronger local heat waves in the ocean. This pushes ecosystems to their limits,” explains Barkhordarian, expert for atmospheric sciences. Barkhordarian is a member of the Cluster of Excellence Climate, Climatic Change and Society (CLICCS) at Universität Hamburg.

Barkhordarian’s team has shown that in the past, the pool has repeatedly encouraged local heat waves in the ocean. One of these phenomena was the now-legendary Pacific Ocean Blob in 2014 and 2015, which had catastrophic consequences. The ocean’s productivity collapses, toxic algae emerged, and a large number of sea birds and ocean mammals died. Furthermore, the event led to serious drought on the West Coast of the United States.

The latest heat wave lasted for a full 3 years, from 2019 to 2021, with water temperatures up to 6 degrees above normal. Barkhordarian’s team has now shown that this extreme event is directly traceable to rising, human-induced greenhouse gas emissions. The probability that such heat waves would have happened without human activity is less than one percent; there is a 99 percent probability that greenhouse gas emissions are the cause.

The study shows that the temperature in the northeast Pacific has risen in the last 25 years at a average of .05 degrees Celsius per year. Overall, the region cools down in winter less and the summer lasts an average of 37 days longer. The result has been that in the last 20 years alone, there have been 31 ocean heat waves, while from 1982 to 1999 there were only 9.

“More frequent and extreme heat waves in the ocean dramatically burden ecosystems. This involves enormous risks for biodiversity. It can lead to a transgression of a threshold in marine ecosystems from which it will no longer be possible to recover,” says Armineh Barkhordarian. “By discovering the warm pool, we now gain crucial information about the probability of such events in the future.”

To what extent are human beings responsible? Using what is known as “attribution research,” researchers study how the world would  develops with and without human impact. For example, in the present study, they calculated the share of heat waves in the ocean that can be traced back to greenhouse gas emissions caused by human beings after 1982. This makes it possible to make statistical statements for the future.