Major success with European research funding€3.5 Million for the Humanities at Universität Hamburg 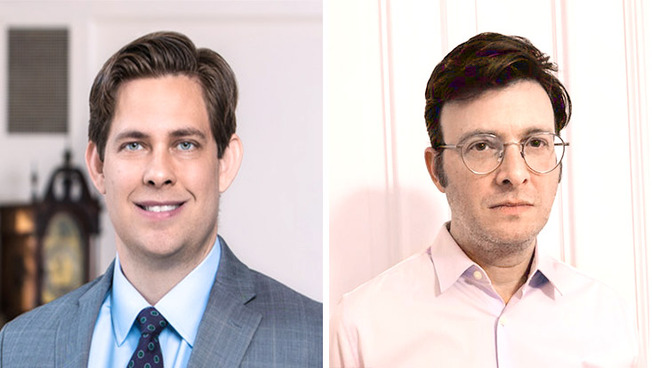 Dr. Aaron Butts (left) and Dr. Yoav Meyrav will receive funding from the European Research Council.
The European Research Council has awarded funding to 2 humanities projects. The projects on the history of Ethiopian and Syrian Christianity and Hebrew philosophical manuscripts respectively will receive a total of €3.5 million over the next 5 years.

Dr. Yoav Meyrav from the Mainmonides Centre for Advanced Studies at Universität Hamburg has received a Starting Grant from the European Research Council (ERC) in the amount of about €1.5 million for HEPMASITE: Hebrew Philosophical Manuscripts as Sites of Engagement. At the Asien-Afrika-Institut, Dr. Aaron Butts will receive the Consolidator Grant of roughly €2 million for his project BeInf: Beyond Influence: The Connected Histories of Ethiopic and Syriac Christianity.

Dr. Yoah Meyrav will study highly varied Medieval philosophical manuscripts in Hebrew, which often include scholarly corrections, notes, marginalia, comparisons, and observations. HEPMASITE is the first project dealing with this scientific corpus with the aim of decoding the hidden history of Jewish philosophy. The goal is to intensify the understanding of Jewish philosophy and to study how it is practiced in the real world, especially how human beings teach and study it.

Dr. Yoav Meyrav studied philosophy and general studies at the University of Tel Aviv, where he received his doctorate in 2017. Since 2018, he has been a research associate at the Maimonides Centre for Advanced Studies at Universität Hamburg. His project is set to begin in summer 2022.

Dr. Aaron Butts and his team will focus on the interconnectivity of Ethiopian and Syrian Christianity using a multidisciplinary approach, drawing from art history, linguistics, manuscript studies, philology, textual studies, and history. The BeInf project, which will cooperate with the Cluster of Excellence Understanding Written Artefacts, will not only make a significant contribution to Ethiopian studies but also serve as a guidepost for other humanities projects with a multidisciplinary approach to complex connected history queries. The project is set to begin in summer 2022.

Dr. Aaron Butts is an associate professor at the Department of Semitic and Egyptian Languages and Literatures at the Catholic University of America in Washington, D.C. More recently, he was named Andrew W. Mellon Chair of Early Christian Studies. From 2020 to 2021, he used his Humboldt Research Award to pursue research at the Hiob Ludolf Centre for Ethiopian and Eritrean Studies of Universität Hamburg.

Katharina Fegebank, Hamburg’s senator for science, says: “The Cluster of Excellence Understanding Written Artefacts and the Maimonides Centre for Advanced Studies at Universität Hamburg, with their original interdisciplinary approaches, are jewels in Hamburg’s research landscape. I am delighted by this most recent proof of the humanities’ visible excellence in research and I congratulate both researchers on their success.”

Univ.-Prof. Dr. Hauke Heekeren, president of Universität Hamburg: “I congratulate Dr. Aaron Butts and Dr. Yoav Meyrav on their success! The ERC grants attest to the outstanding work of both scholars in their respective fields. For Universität Hamburg, and especially for the Faculty of Humanities, these 2 grants are an unusual mark of recognition that make us proud.”

The European Research Council and its grants