With delegates from 12 countriesInternational Exercise on Nuclear Disarmament 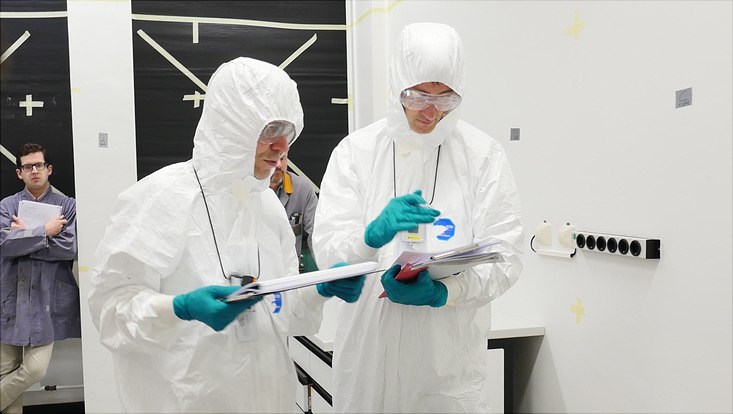 On behalf of the Federal Foreign Office and the French ministry of defense and foreign affairs, researchers from the Carol Friedrich von Weizsäcker Center for Science and Peace Research at Universität Hamburg are organizing a multi-day exercise on controlled nuclear disarmament. Approximately 30 researchers and diplomats from 12 countries are taking part at the Forschungszentrum Jülich.

The exercise will take place from 4–8 April 2022 in the laser protection area of the Forschungszentrum Jülich. Seven participants will take on the role of inspectors to face 7 parliamentarians from a fictitious nuclear power. They will practice with a decoy of their own design that does not contain plutonium but the less harmful radioactive barium and californium.

The background of the exercise is the still unrealized Treaty on the Non-Proliferation of Nuclear Weapons from 1968, the goal of which was nuclear disarmament under international supervision. While nuclear powers the world over have since destroyed an estimated 60,000 nuclear warheads, they have not done so under international supervision. Thus, important aspects have not been subject to review, for example, the question as to whether the radioactive material in the weapons has actually been handled such that it cannot be used again for the purposes of war. Today, there are still far more than 10,000 warheads in existence. Enough to destroy the world several times over.

“Nuclear powers keep the construction details of their nuclear weapons top secret. This is why they do not want prying eyes when they disarm and they reject internationally controlled disarmament as long as there is no procedure for ensuring the secrecy of their information,” explains the physicist Prof. Dr. Gerald Kircher, head of the Carol Friedrich von Weizsäcker Center for Science and Peace Research at Universität Hamburg. “This is why, during our exercise, nobody may see the nuclear warhead we devised and the nuclear power will not allow any measurements because these could lead to conclusions about the construction and force of their weapons.”

At a previous exercise in 2019, a procedure was tested that fulfilled the requirements of the nuclear powers, for example the use of measuring devices that involved color coding rather than concrete values. “The entire thing worked but the inspectors were too slow,” explains Prof. Kirchner. “They needed 3 1/2 days to inspect the dismantling of a warhead that had already been separated from its carrier—and even without the further processing of the radioactive material.”

This time, participants, including delegates from the nuclear powers France, Great Britain, and the United States, and experts from countries without nuclear weapons such as Canada, Japan, and Norway, will test procedures that accelerate the processes. For example, thus far, buildings have been inspected using contamination meters to ascertain whether radioactive material has been secretly ferreted away. Now a new imaging procedure with a single measurement can reveal whether a fictitious nuclear power is trying to siphon off radioactive material.

“If we ever disarm in line with the treaty, we would have to destroy several hundred nuclear weapons per year. Three-and-half days for a single warhead and one step in the disarmament process would be too long,” according to Kirchner. “But the important message is that controlled disarmament is possible—while ensuring secrecy and within an acceptable time-frame.”

You can find an interview with Prof. Kircher about the exercise in Universität Hamburg’s Newsroom.