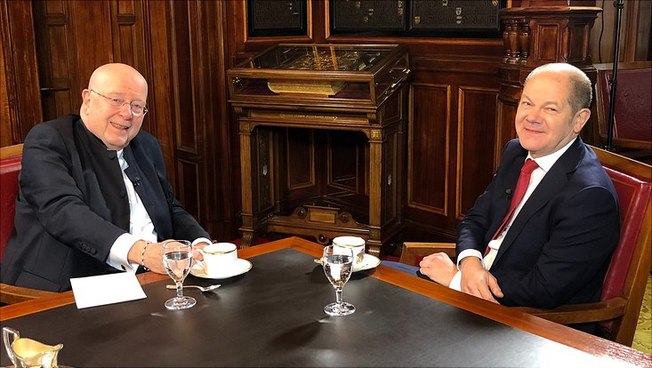 University president Univ.-Prof. Dr. Dr. h.c. Dieter Lenzen (left) talking to former mayor of Hamburg Olaf Scholz
Today the German Bundestag, the Parliament of the Federal Republic of Germany, elected Olaf Scholz as the country’s ninth chancellor. In 1978, following his Abitur, Scholz began studying law at Universität Hamburg. He completed his studies in 1984. He remained connected to the University even after he became Hamburg’s mayor. His vice chancellor, foreign secretary, and minister of the chancellery are also University alumni.

University president Univ.-Prof. Dr. Dr. h.c. Dieter Lenzen said “I emphatically and warmly congratulate Olaf Scholz on his election. I am certain that Olaf Scholz is the right chancellor for these difficult times and I know that he will make decisions with resolve and straightforwardly. The experience of working together in Hamburg will continue. It was possible to get a brief glimpse of this when I had the opportunity in December 2017 to interview him on the topic of Hamburg as a center for academic pursuit. And indeed: the plan became reality—Science City Bahrenfeld is now underway. All the best for him and our country!”

See the interview between Univ.-Prof. Dr. Dr. h.c. Dieter Lenzen and the former mayor of Hamburg Olaf Scholz at https://www.uni-hamburg.de/newsroom/videos/2017-12-20-lenzen-scholz-wissenschaftsstandort.html.

The future vice chancellor, Dr. Robert Habeck, studied literature and philosophy at Universität Hamburg until 1996 and received his doctorate in 2000. In 2004, the new foreign secretary Annalena Baerbock completed undergraduate studies in political science at the University. The new minister of the chancellery Wolfgang Schmidt completed his law studies with the first Staatsexamen (state examination) at Universität Hamburg in 1997 and subsequently worked here for 3 years as a research associate.