Welwitschia mirabilis“Living Fossil” in the Namib Has Different Subspecies 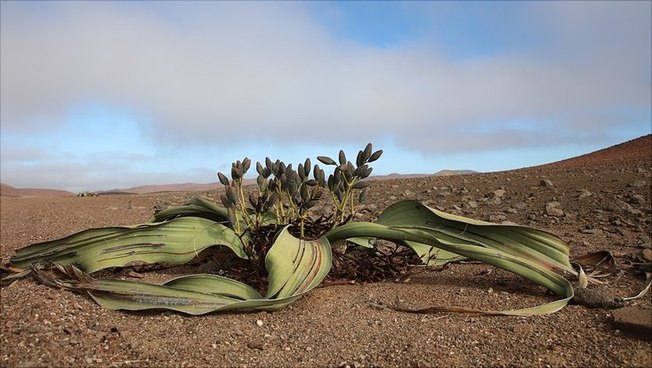 Specimens of the Weltwitschia mirabilis can live over 1,000 years.
A family of Welwitschia already inhabited Earth 112 million years ago. A research team in the Department of Biology at Universität Hamburg has now used short DNA sequences to discover that the only still-living species of Weltwitschia mirabilis has different subspecies. The findings were published in the journal Scientific Reports.

The Weltwitschia mirabilis looks bizarre: its stem is about one meter thick but no more than 50 cm high and it sports only 2 leaves that lie on the ground. These can grow up to 8 m long and they continue to grow throughout the plant’s life. The plant can live more than 1,000 years. Male and female plants have cones similar to those on conifers, but pollen is disseminated by animals such as flies or wasps, similarly to pollen dissemination among modern flowering plants.

While its early ancestors lived over 112 million years ago on several continents, the only surviving species has taken refuge from the tough competition with the modern flowering plant in the extremely dry zones of the northern Namib in Angola and Namibia.

After studying the ecology and evolution of the Weltwitschia for several years, a team from the Department of Biology has now published its data. “We were especially surprised by the findings of the genetic investigations using so-called microsatellites, that is, short DNA sequences, with which the populations from the area can be compared for genetic similarities,” said Prof. Dr. Norbert Jürgens, professor of biodiversity, evolution and ecology. “This enabled us to distinguish an Angolan and a Namibian subspecies.”

Previously, only the biologist Beat Ernst Leuenberger had suggested distinguishing the species due to the structure of their blossoms. He made this suggestion in 2001 on the basis of only 8 old plants in the green houses in the Dahlem district of Berlin. American and South African researchers called the existence of subspecies into question in 2014, although the only material they had investigated hailed from a subterritory of Namibia.

Using the microsatellites, the Hamburg researchers have now confirmed Beat Leuenberger’s suggestion, although the boundary between the subspecies lies within northern Namibia. At 18.7 degrees southern latitude, the gene pool separates into a northern and a southern one, with no gene flow between the two.

“We could also prove that the plant shows up in Angola in an area that is double the size of what we previously knew,” said Jürgens. “And in Namibia we could also describe new occurrences.” Here, there is an area that measures 1.096 km in length and is divided by large gaps into 10 mutually isolated subterritories (“fragments”); these fragments often lie in the catchment areas of dried-up rivers that flow only in years with heavy rainfalls.

Many of the fragments can be distinguished from one another on the basis of their climatic and geological properties as well as their genetic composition. “This observation supports the assumption that Weltwitschia did, in fact, find refuge in Namibia but did not stagnate; instead, it adapted to the various environmental conditions,” Jürgens said. The desert drought is no problem for this living fossil, indeed it is a requirement for its continuing survival, far away and unmolested by modern competition. 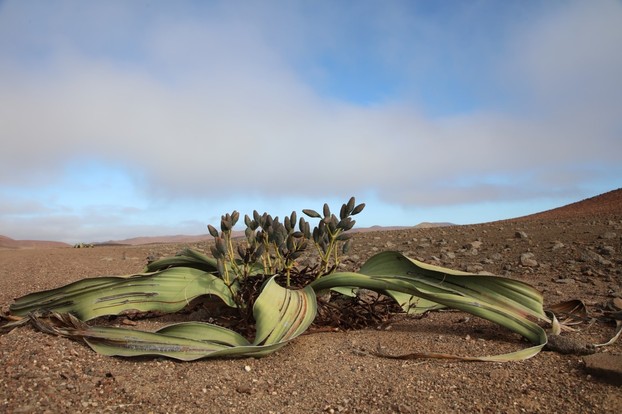 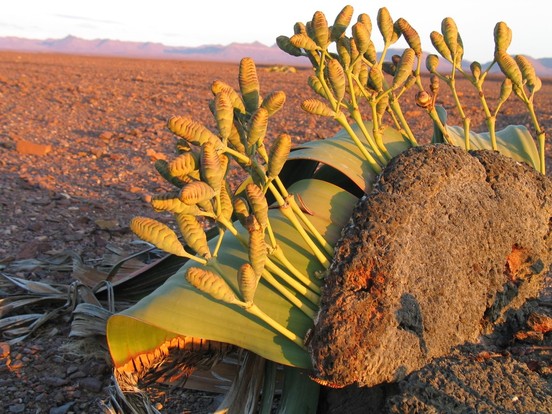 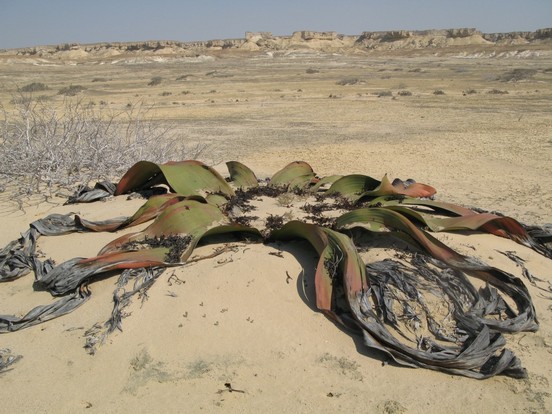