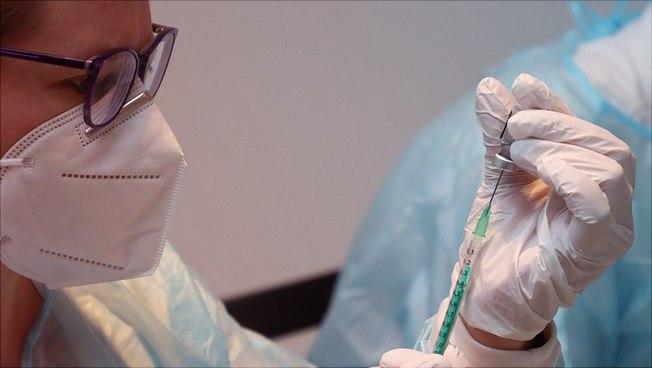 The number of people who are unsure about getting vaccinated has decreased markedly according to the most recent survey.
Despite increasing numbers of vaccinations, more than 90 percent of people are looking with increasing disquiet at the spread of new virus mutations and a potential fourth wave in the fall. This was the finding from the current European COvid Survey (ECOS) conducted between 21 June and 6 July 2021. Despite this, the majority also rejected the idea of incentives to vaccination, such as gifts or vouchers in order to obtain herd immunity. In total, the willingness to be vaccinated among adults in German lies over 73 percent.

Vaccine acceptance has increased over recent months in almost all the European countries surveyed. It is now between 67 percent in France and 84 percent in Denmark and Great Britain. “The increase is predominantly due to a reduction in the number of people who are unsure”, explains Professor Dr. Jonas Schreyögg, scientific director of the Hamburg Center for Health Economics (HCHE) at Universität Hamburg. In Germany, the number of undecided responses has gone down since April 2021, from 17 to 7 percent, with vaccine acceptance increasing over the same period from 67 to 74 percent. Vaccine acceptance was only below 70 percent in the east of the country, and, with 25 percent, showed almost twice as many respondents rejecting the vaccine than in the north. In northern Germany, only 14 percent are skeptical about vaccination. In contrast, 78 percent are in favor of being vaccinated.

For the first time, parents were asked if they wanted their children to be vaccinated against corona. In the Netherlands and France, only half of those surveyed were in favor, with the largest response coming from Portugal and Spain, where almost 3 of 4 adults said they were in favor of vaccinating their children against corona. In Germany, the response was 53 percent. “In principle, parents were in favor of vaccinating their children to protect them from a corona infection. For many parents, the limited data available on potential side-effects is the main reason why they are hesitant.” clarified Schreyögg.

No end in sight? Concerns about the fall

Even though the number of vaccinations is increasing and the incidence rate is going down, many people are concerned about the further development of the pandemic. “Within Europe, we are seeing a north-south divide,” explains Jona Schreyögg. The fear of further virus-mutations is particularly high in Spain and Portugal, with 96 and 97 percent respectively expressing disquiet. In Portugal, 75 percent of the population even admitted to being very or extremely worried. The numbers of those very or extremely worried in Germany were markedly lower at 87 and 51 percent, but 9 out of 10 say they are worried to some degree. The question as to whether there might be a fourth wave in the fall showed very similar results. Only 10 percent of those surveyed in Germany stated they were not worried, 57 percent in contrast are very or extremely worried. “Here as well, we see that the population is increasingly worried, from Denmark down to the Mediterranean.” points out Schreyrögg.

Could providing incentives to get vaccinated accelerate the progress towards herd immunity and thus reduce people’s concerns? “We have investigated whether the measures used, for example, in the USA or in Israel, would also work in Europe.” reveals Schreyrögg. Whether a restaurant voucher, lottery ticket, or 100 Euros for a vaccination, 54 percent of those surveyed rejected the idea of incentivizing vaccination to reach herd immunity outright, a further 27 percent said they were undecided. “We got the same result for a range of possibilities, which was a general rejection of incentives” explains Schreyögg. In Germany for example, only 24 percent were in favor of a financial incentive, 21 percent were for a food voucher, and only 20 percent each for a lottery or a university scholarship.

Masks here to stay, air travel and handshakes on the decline

The survey also asked questions about changes in behavior and the coronal rules. While many proved to be unpopular during the pandemic, some have shown to have some long-term support. Of those surveyed, 16 percent are planning to only work from home in the future, with an additional 30 percent mentioning they would like to work from home at least part of the time. At least half of those surveyed, said they would wear masks in the future at least during flu season, that they would avoid air travel as much as possible, and they would also seek to avoid large gatherings of people. Handshakes and other greetings such as hugs or kisses also seem to be going out of fashion, with every second person saying they would refrain from doing so in the future.

See a graphic representation of the results at https://www.hche.uni-hamburg.de/en/corona.html

About the European COvid Survey (ECOS)

The European COvid Survey (ECOS) has been surveying 7,000 people in Germany, Denmark, France, Great Britain, Italy, the Netherlands, and Portugal every two months since April 2020, with the goal of measuring the attitudes and concerns of people in Europe throughout the pandemic. Vaccination has been a special area of focus. Approximately half of those survey have already participated multiple times. One section of the questionnaire always remains the same, and thus reveals changes over the duration of the pandemic. New questions are added to address current events. To date, there have been seven rounds of the survey, with the current survey adding Spain to the list of countries, and increasing the number of participants to 8,000. 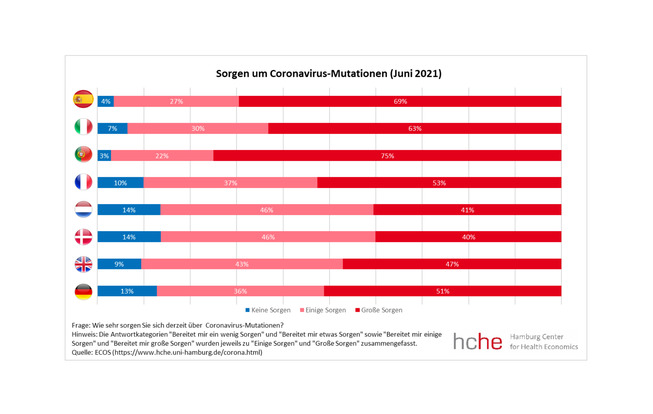 for screen display (JPG)for print purposes (JPG)
Graphic representation of the responses to the question “How much do you currently worry about coronavirus mutations?”
Picture: HCHE 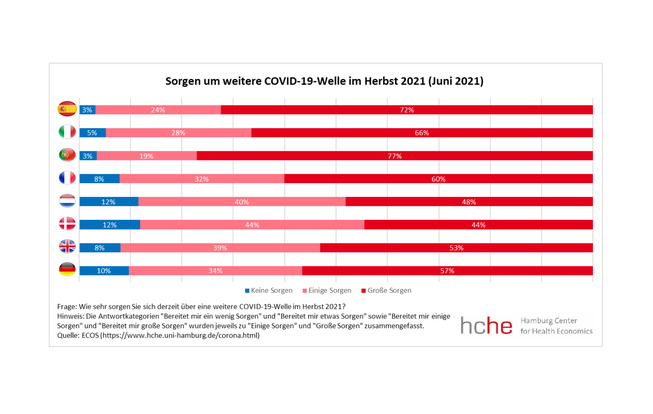 for screen display (JPG)for print purposes (JPG)
Graphic representation of the responses to the question “How much do you currently worry about another Covid-19 wave in the fall of 2021?”
Picture: HCHE