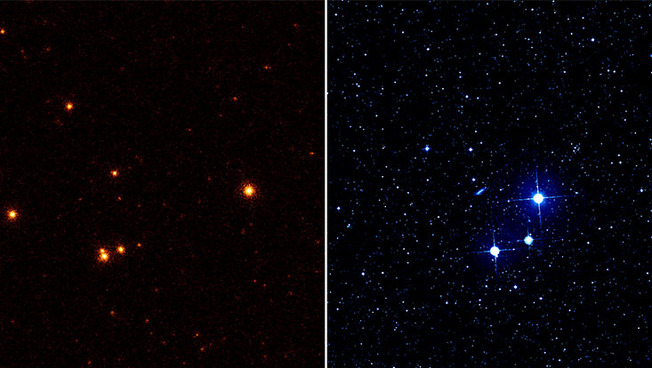 A comparison of the x-ray image of young stars in the Eta Chamaeleontis cluster in the Chameleon constellation with the eROSITA (left) and the optical image (right) with a standard telescope The stars depicted here are 1,000 times more active than our sun. Both images show the same area of the sky.
Two years ago, the eROSITA x-ray telescope flew into space as part of a Russian-German cooperation to create the most comprehensive sky map in x-ray frequency range to date. The German eROSITA consortium, which includes Universität Hamburg, has now published the first data that the x-ray telescope, which was attached to a satellite, gathered.

The publication of the first eROSITA data will be flanked by 35 further scientific publications to appear in a special edition of the journal Astronomy and Astrophysics. These are already publicly accessible. Six of these publications were spearheaded by researchers from Universität Hamburg and they concentrate on the activity of stars as well as the effects of black holes on their surroundings.

“Using data to help us, we can show that massive black holes heat up gas in large groups of galaxies,” says doctoral researcher Thomas Pasini from the Hamburg Observatory. Pasini oversaw a publication. Proof of this became possible thanks only to the new images.

“It’s fabulous to see that this telescope works so perfectly. The earlier data already makes it possible to get path-breaking results and they give a foretaste of the final sky map, which should be completed in a good 2 years,” says Universität Hamburg’s Prof. Dr. Marcus Brüggen. One new, precedent-setting finding that might be made by combining various sky maps in radio and x-ray frequency range is the discovery that black holes transmit stronger rays of matter, called “jets,” the denser their environment is. This means that black holes “feed” on hot surrounding gas. These stronger jets do not lead, however, to larger jets because they can expand only with difficulty in the dense surroundings.

In another project, researchers from the Hamburg Observatory observed a young cluster of stars in the Chameleon constellation. Young stars demonstrate a high degree of magnetic activity, which heats up the plasma they consist of to up to several million degrees Celsius. This hot plasma transmits strong x-rays. X-ray observations are thus very suitable for identifying and studying these stars.

“The x-ray images of the entire sky will contain more than 3 million sources—much more that all currently-known x-ray sources,” says the Hamburg Observatory’s Prof. Dr. Jürgen Schmitt, who oversaw the project from the very beginning.

eRosita is one of two x-ray telescopes on board the Spektr-RG space observatory. The telescope facilitates measurements in x-ray range and makes visible astrophysical events that produce radiation above the ultraviolet spectrum. The Hamburg observatory at Universität Hamburg plays a significant role in the space mission and is responsible for the mission planing for the eROSITA telescope. It will receives support from the Federal Ministry of Education and Research (BMBF). Furthermore, the Hamburg researchers will compare the x-ray sources with data from optic telescopes, for example, the Hamburg TIGRE telescope in Mexico and radio telescopes such as the Low Frequency Array (LOFAR). The scientific assessment of the data is part of the Cluster of Excellence Quantum Universe’s research activities.

As it has for many other researchers, COVID-19 made the eROSITA team’s work more difficult. “Just 6 months after eROSITA’S scientific observations got underway, the worldwide pandemic forced us to change our approach massively,” says lead researcher Dr. Andrea Merloni from the Max Planck Institute for Extraterrestrial Physics. Even the operation of the telescope 1.5 million kilometers away had to be handled from home. “I would like to believe that the unique opportunity of working with a brand-new ‘discovery machine’ helped many of us to maintain focus. At least, it did so for me,” says Merloni. “eRosita gave us many reasons to celebrate and we are all looking forward to having a real party!” 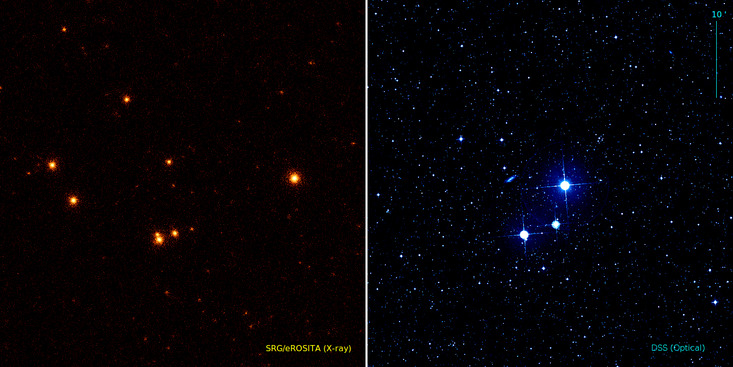 for screen display (JPG)for print purposes (JPG)
A comparison of the x-ray image of young stars in the Eta Chamaeleontis cluster in the Chameleon constellation with the eROSITA (left) and the optical image (right) with a standard telescope The stars depicted here are 1,000 times more active than our sun. Both images show the same area of the sky.
Picture: eROSITA collaboration / Robrade