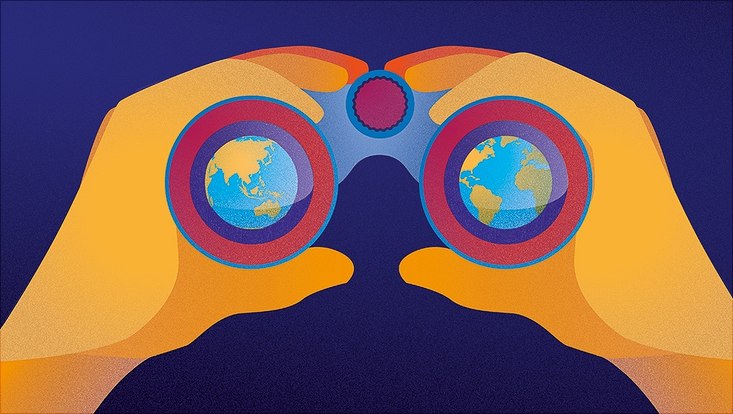 As part of the Hamburg Climate Futures Outlook, researchers examined, for example, the effects of national climate laws, climate protests, or the withdrawal of investment from fossil fuels on the development of future climate change.
Today, the Hamburg-based Cluster of Excellence “Climate, Climatic Change, and Society” (CLICCS) is publishing a new, essential study on climate futures. The study represents the first systematic attempt to investigate whether a climate future with net-zero carbon emissions is not only possible but also plausible. The authors examine plausibility from a technical-economic perspective, but also with regard to the societal changes necessary for such a future. They conclude that deep decarbonization by 2050 is currently not plausible—the current efforts to bring about societal transformation need to be far more ambitious.

The European Union is now increasing the ambition of its climate goals, and the German Federal Constitutional Court has recently committed Germany to implementing more ambitious climate action. So, are we already on the path to a climate-neutral future? “Which climate futures are plausible is not only a physical question, it is at present especially a social one,” says CLICCS Speaker Prof. Detlef Stammer from Universität Hamburg. “In the Hamburg Climate Futures Outlook we investigate the transformative power of social processes and have developed a completely new method for doing so. We’ll then combine these outcomes with findings from the natural sciences, to ascertain what is plausible by process of elimination.”

The key factors being explored, also referred to as social drivers, include: United Nations’ climate policy, national climate legislation, protests and social movements, divesting from fossil fuel industries, and media coverage. Crucially, none of the 10 social drivers assessed in the Outlook appear to have enough momentum to reach deep decarbonization by 2050. Yet reaching deep decarbonization by mid-century is vital for achieving the climate targets laid out in the Paris Agreement.

However, 6 of the drivers could foster a gradual decarbonization: “The majority of the factors we evaluated certainly support the net-zero goal. For example, the factor ‘climate policy’ has been strengthened by the USA’s reentry into the Paris Agreement,” explains Prof. Anita Engels, a social scientist at Universität Hamburg and CLICCS Co-Chair. “At the same time, the extent to which climate protests can continue to put pressure on governments after COVID-19 will be an important aspect.” Another crucial driver is divestment from fossil fuels. However, companies often operate under long investment cycles, which means the effects will only become apparent down the road.

The authors concluded that neither high-emissions nor low-emissions scenarios are currently plausible: “Studies show that very high CO2 emissions can produce tremendous economic costs. What’s more: global coal reserves are finite, and clean energy is becoming more affordable. As such, governments and companies alike will be forced to change course,” says CLICCS Co-Chair Prof. Jochem Marotzke from the Max Planck Institute for Meteorology. However, the report points out that humanity still lacks the technologies needed for rapid and large-scale removal of carbon dioxide from the atmosphere, an essential prerequisite for cutting emissions to net zero. The authors further translated these findings about plausible emissions into an assessment of long-term warming, by incorporating the latest research on how CO2 emissions affect the climate: “Our results imply that global surface warming of less than 1.7 degrees Celsius by the year 2100 is not plausible, but nor is a rise of more than 4.9 degrees.”

Other studies, like the IPCC Special Report on Global Warming of 1.5°C and the United Nations Emissions Gap Report, also assess which pathways might achieve the goals laid out in the Paris Agreement, but they focus more on the technical and practical requirements. “The Hamburg Climate Futures Outlook analyzes which social drivers can enable and motivate the change. We’re using this new analytical framework to systematically assess the available data with regard to the necessary decarbonization,” said Prof. Engels.

The study’s analytical approach is unique: “In the Hamburg Climate Futures Outlook, we’re not looking into what would be necessary, feasible or desirable. We’re analyzing which climate futures are plausible—and which ones aren’t,” says Prof. Marotzke, who was also one of the key contributors to the upcoming IPCC report. “The social challenge is far greater than many people can imagine,” concludes Prof. Stammer. “As such, our findings represent a wake-up call for the political community and society at large.”

About the Hamburg Climate Futures Outlook

More than 40 researchers from the Cluster of Excellence CLICCS are contributing authors of the Hamburg Climate Futures Outlook. They hail from such diverse disciplines as the natural sciences, social sciences, economics and law. In addition, there are ca. 20 national and international reviewers. With the development of the Social Plausibility Assessment Framework, the Cluster has introduced a new scientific method for both assessing the status quo of social drivers and projecting their future trajectory.

From 2021 onwards, the Hamburg Climate Futures Outlook will be released annually. It analyzes both physical and social dynamics alike, and evaluates which climate futures are not only possible but also plausible.

The Cluster of Excellence Climate, Climatic Change, and Society (CLICCS)

You can find the Outlook report and supporting materials such as high-resolution press photos on the Climate, Climatic Change, and Society (CLICCS) Cluster of Excellence website.