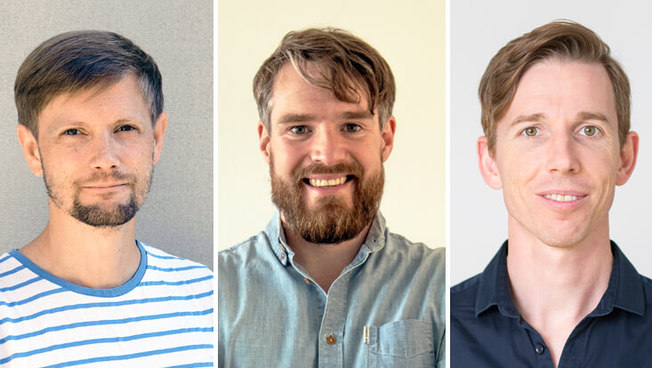 The European Research Council (ERC) awards Starting Grants to outstanding early career researchers who graduated from their doctoral studies less than 2 years ago. The grant provides them with the opportunity to implement innovative plans and foundational research. Funding is up to €1.5 million per project, and lasts for 5 years.

Univ. Prof. Dr. Dr. h.c. Dieter Lenzen, President of Universität Hamburg “I congratulate Prof. Dr. Michael Filarsky, Prof. Dr. Sebastian Gluth, and Dr. Manuel Meyer on their success. Securing such high-profile funding, among other things to establish new research groups, is particularly important for early career researchers. Universität Hamburg is delighted to have such talented staff members, across a range of fields, on board.”

An overview of the new ERC Starting Grants at Universität Hamburg:

About half a million people die every year from malaria, this most common infectious disease in the world. As yet, there is no effective vaccine against the disease, and the adaptability of the malaria pathogen Plasmodium falciparum means it has developed resistence to most medications, making it increasingly difficult to treat.

The molecular mechanisms in the Plasmodium falciparum reproductive cycle are not yet fully understood. These single-celled organisms have extremely complex life cycles, in 2 different hosts: firstly, it must infect a mosquito, where it reproduces, and spreads to a human host when that person is bitten by the infected mosquito. There it multiplies by cell division, destroys red blood cells and releases potentially fatal flare-ups. Most of these parasites remain in the human body, and continue to divide over and over. Only a few transform into the male and female forms which are then transmitted to the next mosquito who bites the infected person, and the cycle begins again.

“The parasites have a kind of molecular switch that triggers their transformation into male and female forms”, explains molecular biologist and specialist in human parasites, Prof. Dr. Michael Filarsky. “Normally, this switch is in the ‘off’ position. Some kind of environmental trigger may lead to specific proteins, that is, specific protein molecules, hitting that switch and turning it ‘on’. If we can find out how this interaction between environmental influences and molecular mechanisms works exactly, we could design new drugs to prevent it happening, and thus stop Plasmodium falciparum multiplying.”

Prof. Dr. Michael Filarsky studied biology at the University of Regensburg and received his doctoral degree there in 2013 with a thesis on epigenetics. As a postdoctoral researcher, he moved to the Swiss Tropical and Public Health Institute (SwissTPH) to specialize in research on the malaria pathogen Plasmodium falciparum. He has been a junior professor at Universität Hamburg since 2019, working in the Centre for Structural Systems Biology (CSSB) at Science City Hamburg-Bahrenfeld.

Prof. Dr. Sebastian Gluth: TrackingMinds –  how we understand the thoughts and actions of other humans

What meaning do humans attach to the behavior of others? That is a central question for cognitive neuroscience and many other disciplines as well. In his project “TrackingMinds”, Prof. Dr. Sebastian Gluth is pursuing the hypothesis that people use their own mental decision-making processes to follow the thinking of others, in order to determine their hidden convictions or preferences. With this approach, Gluth is going beyond existing approaches like the mirror neuron system. This is because his theory intends to explain not just how people observe other people, but also how they predict the decisions others will make, and draw conclusions based on that assumption.

The project is using the most modern neuroscientific methods available. In addition to the mathematical specification of thought functions through cognitive modeling, the project is also using eye-tracking, functional magnetic-resonance imaging, electroencephalography, and EEG hyperscanning. An artificial intelligence (AI) system is also being developed. The results of these experiments should help improve human-machine interaction through the use of “more understanding” AI systems. Gluth is also hoping to find new approaches to treating psychological disorders such as autism and social-anxiety disorders.

Prof. Dr. Sebastian Gluth studied psychology at the Humboldt-Universität zu Berlin from 2004 to 2009. He completed his doctoral studies from 2009 to 2013 at the Institute of Systems Neuroscience at the University Medical Center Hamburg-Eppendorf. In 2013, he became a postdoctoral researcher in the Faculty of Psychology at the University of Basel and has been an assistant professor there since 2016. He has accepted a professorial appointment at the Faculty of Psychology and Human Movement at Universität Hamburg from 1 October 2020, where he will be working as part of the emerging field Neurosciences and Cognitive Systems. His ERC grant begins in January 2021.

Dr. Manuel Meyer: AxionDM—the search for axions and axion-like particles of dark matter in the laboratory and with high-energy astrophysical observations

About 80 percent of our universe consists of dark matter, whose composition is yet unknown. However, axions and axion-like particles (ALPs) are presumed to be among it probable parts. As part of “AxionDM”, Dr. Manuel Meyer will combine astrophysical observations with laboratory experiments to examine these particles more closely. The basic assumption is that photons in magnetic fields can transform into ALPs and back into photons, that is, that they oscillate. This transformation should be characteristic in measurements of high-energy cosmic gamma rays originating from distant galaxies. In addition, it is presumed that ALP decay reduces the ability of gamma radiation to permeate the universe, which the measurements should also reflect.

Meyer and his team want to search for these specific signals by comparing existing measurements from a range of telescopes with newly developed model calculations. These analyses should improve sensors and detectors, which will then be used in other experiments, such as the 2021 experiment “Any Light Particle Search (ALPS II)” at the Deutsches Elektronen-Synchrotron (DESY).

Dr. Manuel Meyer studied physics at Universität Hamburg from 2004 to 2010. He was awarded the Otto Stern prize for his Diplom thesis in 2010. His doctorate was also completed between 2010 to 2013 at Universität Hamburg. After working as a postdoctoral researcher at the Univeristy of Stockholm and stays as a Feodor Lynen scholar at Stanford University and at DESY, he has been a research fellow under the European research funding program Marie Skłodowska-Curie Actions at the Erlangen Centre for Astroparticle Physics at the Friedrich-Alexander University of Erlangen-Nürnberg since 2019. His ERC grant at Universität Hamburg begins in June 2021, as part of the Cluster of Excellence Quantum Universe.