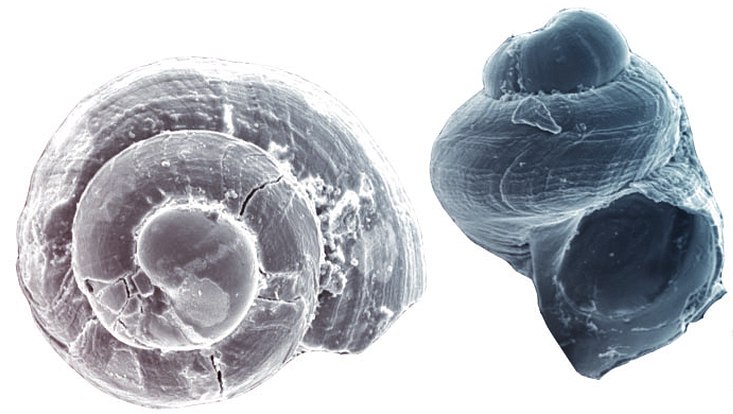 A Juvenile of Planaxis sulcatus (<0,5 mm) from Oman. (Scale: 100 µm)
In some regions the Planaxis sulcatus sea snail produces larvae while in others they produce further-developed offspring. A research team headed by Benedikt Wiggering and Prof. Dr. Matthias Glaubrecht from the Center of Natural History (CeNak) at Universität Hamburg have now proven for the first time that the animals in question are indeed one and the same species and have thus adapted brilliantly to living conditions. Their study was published in the journal BMC Evolutionary Biology.

Poecilogony describes a phenomenon in which animals that are barely distinguishable as adults have had very different developmental histories. This phenomenon applies to only a very few marine invertebrates. The viviparous sea snail Planaxis sulcatus is one of the few examples. While some offspring are born in a highly developed state (some even sport their adolescent shell!), others are released as swimming larvae into the ocean’s currents, where they feed off plankton.

In earlier studies, these different forms of reproduction had been observed in the Persian Gulf and New Zealand in populations at a great distance from one another. A team headed by Prof. Dr. Matthias Glaubrecht, CeNak director, and Benedikt Wiggering, research associate and doctoral candidate in CeNak’s Department of Animal Diversity, have now investigated the breeding strategies of this snail species.

The researchers studied the brood pouches of 365 snails to measure the size of the larvae or offspring contained therein. They discovered that the developmental stages of the growing animals differed dramatically depending on region: offspring in the west measured up to 1.5 mm, while samples from the east revealed that all offspring were at an earlier stage of development.

To ensure that the animals did not belong to different species or even to another mysterious species that looks the same but cannot produce its own young, the CeNak researchers took DNA samples from a few specimens. The analysis revealed that the three groups can be distinguished at a molecular and genetic level. “Yet our data also suggests that these are intraspecific differences, not interspecific,” says Wiggering. The findings thus suggest that in the case of the Planaxis sulcatus, poecilogony is indeed at play.

For the study, researchers analyzed specimens from 71 populations hailing from 5 different regions of the Indian Ocean and the western Pacific, making it the first time that the entire distribution of the species has been taken into consideration. For several years, the team itself had been collecting snails on expeditions, for example on the East African coast, Thailand, Indonesia, and Australia; the other samples come from the natural history collections of major museums around the world.

Benedikt Wiggering suspects that the deviations in the animals’ development can be traced back to the different regions’ environmental conditions: “It is quite possible that, for example, the higher levels of sea salt in the West Indian Ocean resulted in mothers keeping their offspring in their pouches longer to protect them. On the other hand, larvae can survive independently at an earlier stage in the lower salinity of the Indo-Pacific.” For CeNak director Matthias Glaubrecht, it is already clear: “Like many other organisms, this snail also thrives on diversity. Diversity is, as it were, the secret recipe of evolution. And our snails are a downright textbook case.”