This page:UHH > Newsroom > Press releases > 2019 > Fourth DFG center for advanced study in the humanities and social sciences for Universität Hamburg 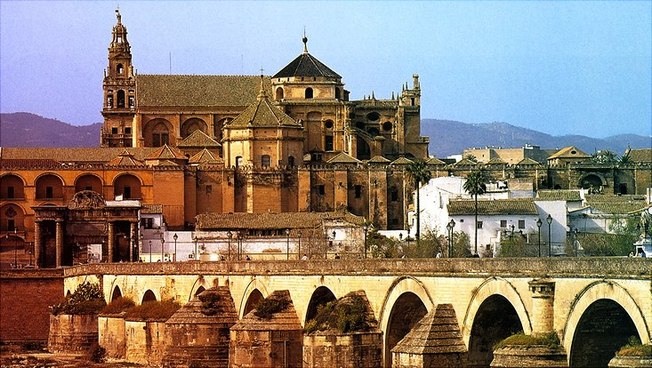 Thanks to over 2,000 years of continuous settlement in Córdoba (southern Spain), researchers have an excellent opportunity to study Romanization and Islamication. The image shows first-century Roman bridge over the Guadalquivir and the Great Mosque from the eighth century.
The German Research Foundation (Deutsche Forschungsgemeinschaft, DFG) has authorized funding for a new DFG center for advanced study in the humanities and social sciences at Universität Hamburg: Romanization and Islamication in Late Antiquity—Transcultural Processes on the Iberian Peninsula and in North Africa. Researchers will look at 2 processes that continue to shape society today: Romanization and Islamication, meaning the “Roman way of life” and Islamic culture.

Researchers plan to investigate the processes of cultural assimilation in the western Mediterranean, specifically on the Iberian Peninsula and in North Africa. These regions are ideal for comparative research on empires because structurally speaking, they had comparable economic significance for the Roman and Islamic Empires respectively as well as many other features in common.

Prior to assimilation there with 2 distinct cultures, the Celtiberian and the Berber, that were only superficially influenced by Greek culture. The Roman and Islamic Empires introduced to these an Eastern Imperial or Middle Eastern religion of salvation (Christianity and Islam respectively) in the guise of state religion. This historical situation in the first millennium allows researchers to develop new models and theories in the field of transcultural studies and comparative empire studies.

Prof. Dr. Sabine Panzram, who specializes in ancient history, and Islamic scholar Prof. Dr. Stefan Heidemann from Universität Hamburg submitted the application for funding. They will receive €4.2 million for 4 years as well as a flat program allowance of 22 percent of the funding sum. The Roman Islam Center is scheduled to open on 1 April 2020. It will collaborate with, among others, the Spanish National Research Council, the Casa de Velázquez, the École des Hautes Études Hispaniques et Ibériques Madrid (EHEHI), and the Institute of the Ancient World New York (ISAW). In the upcoming years, a total of 48 international researchers will come to Hamburg as fellows to participate in the project. This is the University’s fourth DFG center for advanced study in the humanities and social sciences.