Focus on the concept of “force”:New DFG center for advanced study in the humanities and social sciences for Universität Hamburg 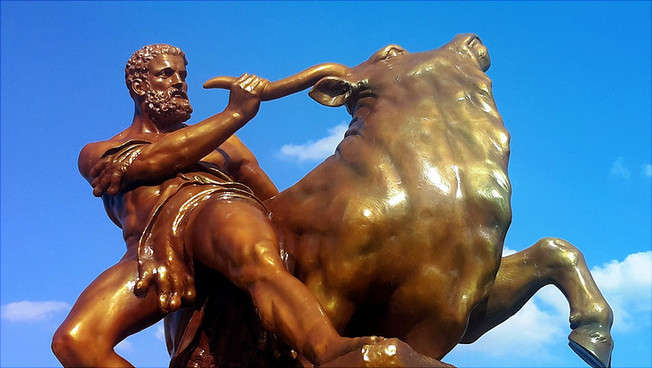 “Force” as a motif in art has various uses—here Heracles, who captured the Cretan Bull. The DFG Center for Advanced Studies explores the various representative forms of force.
Gravitational force, life force, work force, buying force, creative force, the force of art—our concepts of force are not restricted to the natural sciences, but are also central to a number of cultural spheres, not least aesthetics. The new DFG-funded Center for Advanced Study in the Humanities and Social Sciences “Imaginaries of Force” at Universität Hamburg explores common thought and imagination patterns relating to forces in both the arts and science and scholarship. The project has funding for 4 years totaling 3.9 million euros, with an additional 22% program allowance for indirect project costs. The Center starts working in spring 2019.

We usually only perceive forces when we witness their effects. This project investigates how forces are formed and visualized in images, metaphors, narratives, formulae, and simulations. As research to date has largely explored “force” as a central category in art and cultural theory within the confines of individual epochs, this project will offer a comprehensive reconstruction of the worlds of the imagination.

The focus lies not only on the arts and cultural studies, but consciously forges a connection to the natural sciences, in particular to biology. To achieve this, an interdisciplinary team headed up by Prof. Dr. Cornelia Zumbusch from the Institute for German Language and Literature, Prof. Dr. Frank Fehrenbach from the Art History Seminar, und Prof. Dr. Matthias Glaubrecht, director of the Center of Natural History (CeNak) at Universität Hamburg will work together. A fellowship program will bring researchers from further disciplines on board to investigate, for example, the visualization of religious, political, social, or psychological forces.

In addition to representations of force in art, literature, and forces at work in nature, the Center will focus on two further, currently topical forms of force: social force and mass-medially distributed representations and the cultural perception of change in the production and consumption of energy—a particular form of force.

Prof. Dr. Dieter Lenzen, President of Universität Hamburg: “Good people land great successes—in this case, the second DFG center for advanced study in the humanities and social sciences at Universität Hamburg. I am delighted for Professor Zumbusch, Professor Fehrenbach, and Professor Glaubrecht and wish the Center a “forceful” start!”

DFG centers for advanced studies are a funding instrument especially tailored to the working methods used in the humanities and the social sciences. Centers of advanced studies tackle topics that are broadly defined and cooperation between outstanding scientists and scholars is a key aspect of the funding program.