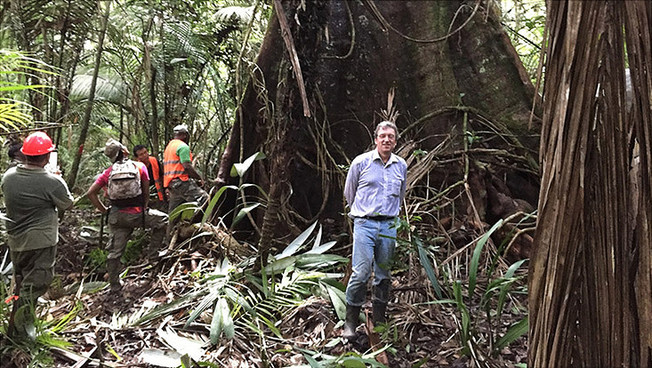 Michael Köhl in the forests of Suriname
Even old trees absorb large amounts of carbon, removing CO2 (carbon dioxide) from the atmosphere. This was recently proven for the first time using trees from the rainforests in Surinam, as Professor Michael Köhl from Universität Hamburg’s Center for Earth System Research and Sustainability (CEN) reports in an article for the journal PLOS ONE. This confirms older trees’ valuable contribution to climate protection.

Michael Köhl and his team were able to demonstrate that trees absorb between 39 and 50 percent of the total carbon for their lifetime in the last quarter of their life – in contrast to the commonly held belief that older trees were less effective in this regard. Though they permanently store carbon (C) in their trunks and limbs, it remained unclear whether or not they could still absorb any meaningful amounts of new C.

The team investigated 61 trees, from three species and varying in age from 83 to 255 years. All of the trees surveyed were from an untouched section of rainforest in Surinam that had been earmarked for clearing by the local government. Disc segments of their mighty trunks were shipped to Hamburg for dating. Based on the growth rings, Köhl’s colleague Dr Neda Lotfiomran was able to measure their annual growth. Using the height and diameter, Köhl then calculated the net weight, i.e., the biomass, of each tree – half of which is carbon. This information, together with the tree rings, makes it possible to determine how much C a given tree absorbed, and at which age.

So, to sum up: Tropical trees remain highly productive, even in their ‘golden years.’ As Köhl explains, “Our findings can also be transferred to European trees, despite the major differences between the forests.” The new study clearly shows that, in the tropics, each tree grows in a highly individual way. Growth and size depend less on age, and far more on random factors and favorable conditions. Some trees spend years as plantlets in the dark zone near the ground, waiting for their chance. Then a neighboring tree falls, letting the sun shine in. When that happens, these fledgling trees seize the opportunity, growing quickly and securing their own place in the sun roughly 40 meters above the ground.

Europe, in contrast, is almost exclusively home to managed forests, many of which are monocultures. In such forests, all plants are roughly the same size – and, given the competition for sunlight and nutrients – are more or less equally unproductive in terms of absorbing C. When they are felled, their carbon remains stored, e.g. in wooden furniture. This creates new space for young trees, which also break down and absorb carbon – which is essentially a climate-friendly cycle.

Nevertheless, with regard to species diversity, it can make good sense to allow managed forests to revert back into natural ones. Yet efforts to do so often meet with resistance. “Those who oppose such plans often claim they violate climate protection. But if we apply our findings to European forests, we can see that this argument has no real basis,” says Köhl – since in our virgin mixed forests, too, which are home to old and young trees alike, trees can continue to break down atmospheric CO2 throughout their lives.